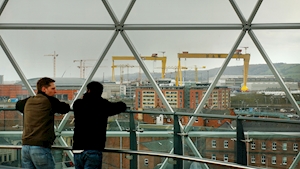 More than 100,000 people could be unemployed in Northern Ireland by the end of 2020, the Economy Minister has warned.

Unemployment has soared since the coronavirus pandemic struck, with the number of people claiming related benefits more than doubling from the start of lockdown in March to 62,800 in July.

Appearing at her department’s scrutiny committee on Wednesday, Diane Dodds warned the figure could exceed 100,000 by the end of the year.

“The UK job retention scheme stops at the end of October and already some companies have had to announce redundancies due to Covid,” she said.

“Analysis completed by my department suggests that the number of individuals claiming unemployment benefits could, in extremis, exceed 100,000 before the end of 2020.

“I will do everything that I can to keep those job losses in Northern Ireland as low as possible, but the reality is that it could be some years before we see economic activity back to pre-pandemic levels.”

Permanent secretary at the Department for the Economy Mike Brennan described the last four to five months as “just the early stages of the economic storm”.

“We haven’t really seen the true impact of it yet,” he said. “80 per cent of people who are self employed are in receipt of the Treasury’s self employed income guarantee scheme, that’s roughly about 70,000-80,000 people. And we have another 250,000 employees on furlough.

“So there you have got 330,000 people in some form of direct income support, those schemes start to taper out from the end of this month and come to an end at the end of October.

“The minister and the Executive have been making representations about the need to consider the durability of that because if you turn off the tap, those people, a large cohort of them will migrate straight to unemployment.

“Our expectation is that by the end of this year unemployment will be over 100,000 here. My personal view is that’s a conservative estimate.”

He added: “This isn’t a cyclical economic shock, this is a profound structural shock to the local economy which is going to take years to address.

“You can’t expect economic output in Northern Ireland to decrease by at least 10% on a per annum basis and not have significant profound structural changes in the local economy.

“The true impact will really on be felt from an economic perspective as we head into the end of October, November and December time.”

Mr Brennan said a number of interventions need to be fast tracked, with 36 bids for projects to be brought to the Executive.

Ms Dodds described the Eat Out to Help Out scheme as having created a “very busy August for many restaurants”, and staycations as having “played an important role” in helping the tourism industry.

“We all know that we are not out of the woods yet,” she said.

She described the rebuilding of the economy as going “hand in hand” with health.

“If we allow the economy to collapse under the weight of Covid, people’s health and wellbeing would also suffer greatly so rebuilding our economy goes hand in hand with protecting people’s health,” she said.

“It is not a choice of either/or, it is absolutely essential that we work to rebuild our economy as well as protecting people’s health and wellbeing.

“I will continue to move the economy forward in a careful and considered way.”

How to Start a T-Shirt Business at Home | Key Things...

Today's Chiropractic HealthNews For You – Which Fasting Method is Best?