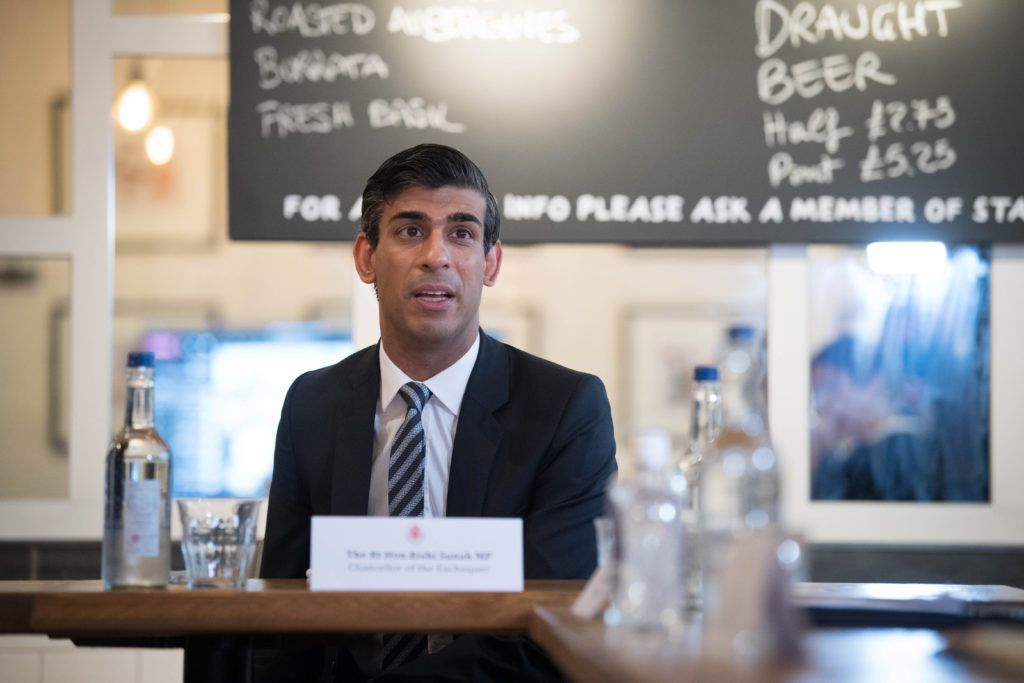 Billions of pounds of extra help has been announced for firms and workers hit by coronavirus restrictions.

There will also be grants of £2,100 (€2,326) available for firms in Tier 2 areas of England, primarily aimed at helping hospitality and leisure venues which have seen takings plummet due to a restrictions on households mixing.

In a move which could be worth more than £1 billion, these grants will also be available retrospectively for areas which have already been subject to restrictions, and come on top of higher levels of additional business support for areas moving into Tier 3.

Around 150,000 business in England could be eligible, the Treasury said.

The move to make the payments retrospective is aimed at heading off criticism from areas of northern England which have been under restrictions for months.

The Job Support Scheme – the plan designed to replace the furlough system from November 1 – will be made more generous across the country.

Instead of only being open to people in “viable” jobs working a third of their normal hours, it will now cover employees doing just 20% of their usual work.

The amount that employers are required to pay to top up their wages has also been reduced to just 5% of unworked hours, down from 33%.

Extra help for the self-employed will see the amount covered by grants increase from 20% of profits to 40%, meaning the maximum payout will increase from £1,875 to £3,750.

1/ I’m introducing a new grants scheme for businesses impacted by Tier 2 restrictions, even if they aren’t legally closed.

I’m providing enough funding to give every business in hospitality, leisure & accommodation a grant worth up to £2,100 every month Tier2 restrictions apply. pic.twitter.com/HvVtz9WReq

This will amount to a potential further £3.1 billion of support to the self-employed through November to January, with a further grant to follow covering February to April.

Mr Sunak said: “I’ve always said that we must be ready to adapt our financial support as the situation evolves, and that is what we are doing today.

“These changes mean that our support will reach many more people and protect many more jobs.

“I know that the introduction of further restrictions has left many people worried for themselves, their families and communities.

“I hope the Government’s stepped-up support can be part of the country pulling together in the coming months.”

Explaining why he has been forced to introduce extra measures just weeks after setting out his Winter Economy Plan, Mr Sunak told MPs that even businesses which can stay open are facing “profound economic uncertainty”.

The Chancellor said hospitality industry chiefs have given a clear message that “the impact of the health restrictions on their businesses is worse than they hoped”.

Mr Sunak’s decision to make the business grants retrospective came after criticism from northern leaders about why extra support was only being announced after London moved into Tier 2.

Greater Manchester Mayor Andy Burnham, who was involved in a bitter wrangle with the Government over his region’s move to Tier 3, said: “Why on Earth was this not put on the table on Tuesday to reach an agreement with us?

“I said directly to the PM that a deal was there to be done if it took into account the effects on GM businesses of three months in Tier 2.”

– Hospitals in Liverpool are treating more coronavirus patients than they were during the peak of the first wave of the pandemic, Dr Tristan Cope, medical director of Liverpool University Hospitals NHS Trust, said as he warned that numbers were continuing to rise.
​
– Medics at Whiston Hospital in Knowsley, a Merseyside borough which has seen some of the highest infection rates in the country, said they are exhausted and disheartened to see people ignoring the rules.

– A total of 101,494 people tested positive for Covid-19 in England at least once in the week to October 14, according to the latest Test and Trace figures, the highest weekly figure since the system was launched in late May.

– Just 59.6% of close contacts of people who tested positive were reached through the Test and Trace system, its worst performance yet.

In the Commons, Mr Sunak acknowledged the strain the second wave of the virus had placed on communities in northern England and other areas under restrictions.

“I understand your frustration, people need to know this is not forever. These are temporary restrictions to help control the spread of the virus,” he said.

“There are difficult days and weeks ahead, but we will get through this together.”

But Confederation of British Industry director-general Dame Carolyn Fairbairn said: “This is a big step towards a more standardised approach of support for areas going into Tiers 2 and 3 and those businesses that face tough times who operate within them.”

She added: “Looking beyond the immediate fire-fighting, the Chancellor will need to look at ways of stimulating business investment and innovation which will be key to how the economy thrives once again.”

Today's Chiropractic HealthNews For You – The Positive Effect Exercise Has...

Law in Hindi Medium | By Ishan

Learning About Horses With Blippi | Animals For Kids | Educational...