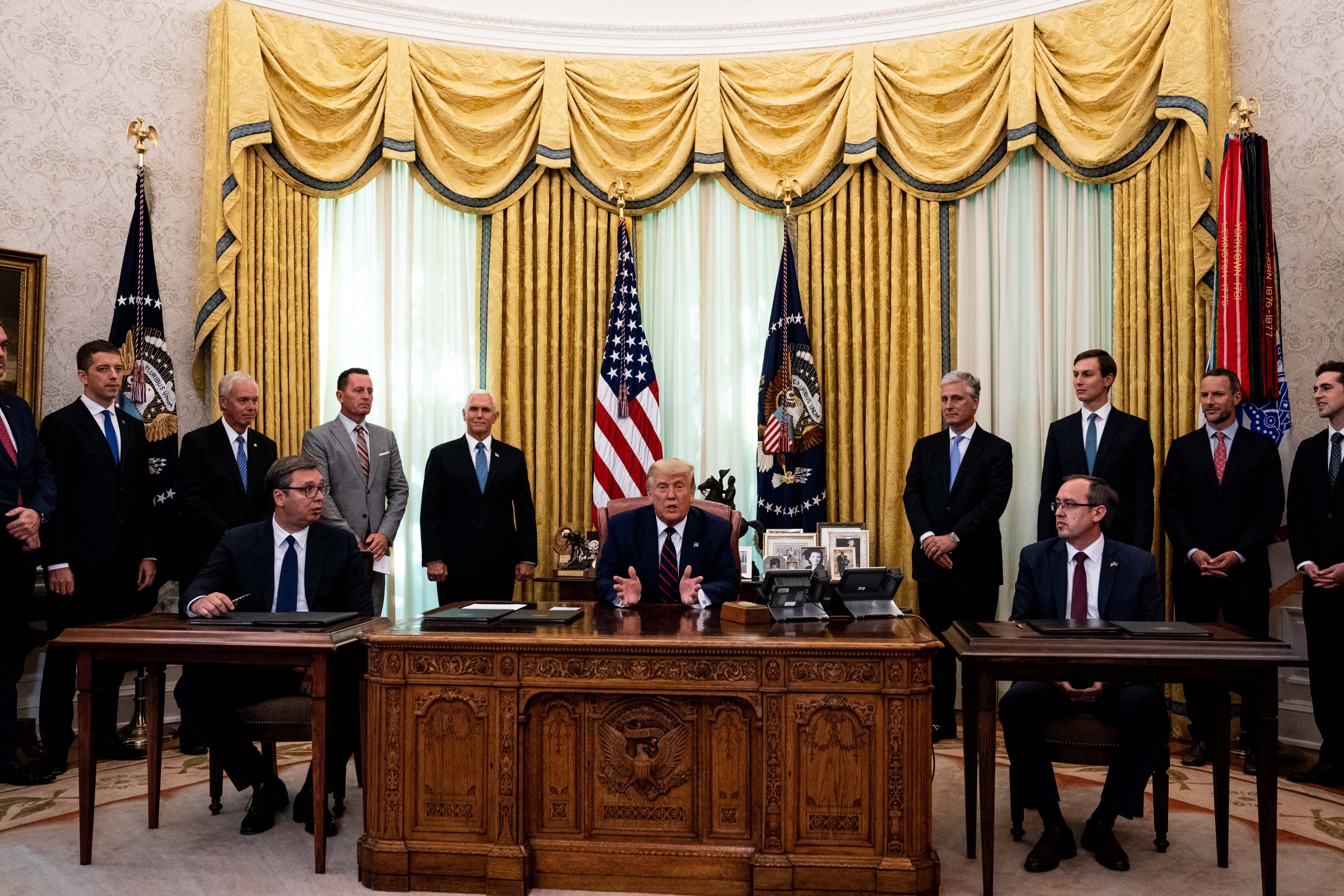 The Trump Administration’s second attempt to gather Kosovar and Serbian leaders at the White House succeeded on September 4 just as Washington and most of the American population was checking out for the extended Labor Day weekend traditionally marking the end of the summer in the US. This White House meeting and signing ceremony had been previously scheduled for late June but fell apart at the last minute, to the relief of many observers.

The overwhelming majority of analysts and observers in the region were relieved that the agreement announced September 4 actually focused on enhancing bilateral economic cooperation and did not include any reference to the highly controversial territorial exchanges between Kosovo and Serbia that would have changed existing borders and upset almost all European and most regional leaders.

A yawner of a deal

The agreement on normalizing bilateral economic relations is expected to be limited to easing some commerce measures and to opening up road, rail and air ties between the two countries, a process that was started in the early months of 2020 with the signature of two separate agreements between the parties regulating transportation, under US auspices.

“By focusing on job creation and economic growth, the two countries were able to reach a real breakthrough on economic cooperation across a broad range of issues,” Trump said on September 4 in the Oval Office, flanked by the two Balkan leaders.

The extent of any new US engagement to galvanize this deal and jumpstart economic activity remains unclear, but the White House went out of its way to highlight the participation of US economic and development agencies in the White House meeting. However, unlike in earlier cycles of US engagement, no high-profile trade and investment missions to the region were announced.  The White House announcement was surprisingly bland:

New Europe readers will recall that Trump’s Special Envoy for Serbia and Kosovo, Richard Grenell, had been transferred back to Washington last February from his posting as US Ambassador to Germany and briefly given the assignment as acting Director of National Intelligence (DNI) until a permanent appointment was made in May. Grenell has continued to manage the bilateral talks between Belgrade and Pristina with the State Department in a supporting role, keeping his focus on generating some kind of foreign policy victory for Trump, whom he has energetically supported over a long period.

An official public announcement was made on September 4 that Kosovo had agreed to open diplomatic relations with Israel, a relatively uncontroversial step for that partially Westernized Muslim country and one that appears to be a small election-year gift to the Trump Administration.  Serbia in parallel agreed to transfer its embassy from Tel Aviv to Jerusalem by July 2021 and to open a commercial office immediately, making it the first European country to follow the Trump administration in moving existing embassy locations to Jerusalem from Tel Aviv.

From the US domestic perspective, these small gains, immediately hailed by Israel’s Prime Minister Benjamin Netanyahu, are unlikely to deliver many additional votes for the Trump re-election campaign from the American Jewish community which largely identifies with Kosovo’s Albanian population as a result of Belgrade’s tough anti-Albanian policies in the 1990s. The community strongly supported then-Democratic President Bill Clinton’s decision to use military force in 1999 to resolve the desperate humanitarian/refugee situation.

While formal diplomatic relations had not been established between Pristina and Jerusalem until now, relations between the two states had been cordial, with Israeli diplomats in nearby countries covering Kosovo developments and maintaining contact with Kosovo’s handful of Jewish citizens, who are fully integrated into Kosovo society.  Several Israel-based NGOs have been deeply involved in humanitarian projects in Kosovo, with primary funding from the American Jewish community.

The West continues to fail when it comes to thwarting the...