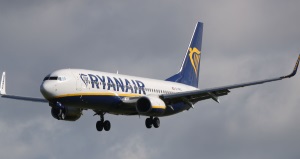 Ryanair is to close it Cork and Shannon bases for the winter as the airline cuts its schedule to 40 per cent of last year’s capacity, warning that more redundancies and unpaid leave were “inevitable” this winter.

As the Irish Times reports, the move comes as bookings have taken a hit from ongoing restrictions to curb the spread of Covid-19. Ryanair said its forward bookings had weakened “materially” in November and December.

The group said it would maintain up to 65 per cent of its winter route network, but with reduced frequencies. It is also closing its Toulouse base for the winter, and making significant base aircraft cuts in Belgium, Germany, Spain, Portugal and Vienna.

“While we deeply regret these winter schedule cuts, they have been forced upon us by Government mismanagement of EU air travel. Our focus continues to be on maintaining as large a schedule as we can sensibly operate to keep our aircraft, our pilots and our cabin crew current and employed while minimising job losses,” Ryanair’s chief executive Michael O’Leary said.

“It is inevitable, given the scale of these cutbacks, that we will be implementing more unpaid leave, and job sharing this winter in those bases where we have agreed reduced working time and pay, but this is a better short-term outcome than mass job losses.

“There will regrettably be more redundancies at those small number of cabin crew bases, where we have still not secured agreement on working time and pay cuts, which is the only alternative.”

The company is already operating at a 70 per cent load factor – a measure of how full its planes are – and expects to carry a total of 38 million passengers in its 2021 financial year. However, it warned that could be revised downward if more lockdowns were imposed during the winter.

Judgment sought on default loan that’s accruing interest of €4,201 a...

Dispute between Johnny Ronan and Kenny family is settled