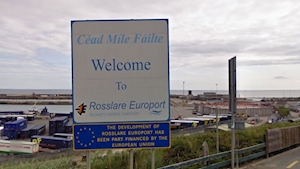 Rosslare Europort is in talks with a shipping company to start a direct ferry service to continental europe.

The goal is for hauliers to avoid any post-Brexit congestion on the UK landbridge.

The talks are aimed at getting the service up and running before the transition period ends on December 31st, it would be six-days-a-week according to The Irish Times.

A frequent ferry service to northern continental Europe is a priority for hauliers who are concerned about congestion at the Port of Dover.

The UK government has warned that failure to secure a trade agreement with the EU could lead to two-day delays with queues of 7,000 lorries in Dover.

Glenn Carr, general manager of Rosslare Europe, said there may be capacity on the existing direct routes but hauliers want a service more frequently than three-days-a-week.

“There are not great options for the haulier, for the manufacturer, for the exporter, for the importer. There needs to be more choice,” said Mr Carr.

“While there might be capacity there it is the frequency and sailing time and speed of sailing time that is critical. We need a frequent fast service to mainland Europe, and I am very hopeful that that is what we are going to deliver.”

Don’t sleep on methane emissions in 2021

After 34 Years, How Education Policy Has Changed In India? |...

Half of Irish consumers happy to spend extra on local products