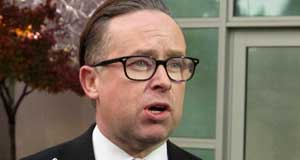 The total pay for Qantas chief executive Alan Joyce fell by 83% in the financial year ending June 30th because of the impact of the coronavirus pandemic, the airline said on Friday.

This pushes Dubliner Joyce from the ranks of Australia’s highest-paid bosses.

The Irish businessman’s total pay was A$1.7 million (€1.05 million) in the financial year, down from A$9.9 million a year earlier, Qantas said in a statement.

Two years ago, Joyce was the highest paid chief executive in Australia, according to the Australian Council of Superannuation Investors (ACSI), after successfully spearheading a turnaround programme. He was ranked eighth by ACSI last year.

The airline said Joyce took no salary from April to July this year as revenues collapsed, before returning to 65% of his base salary in August.

Part of the decline in Joyce’s total pay was because he offered, and the board agreed, to not receive 345,000 shares associated with a long-term incentive from 2017, Qantas said. It added that a decision on whether those shares will ultimately vest or lapse has been deferred until at least August 2021.

Qantas has announced plans to cut 8,500 jobs, or nearly 30% of its pre-pandemic workforce, and the majority of its staff remain stood down and are receiving government support rather than their salaries.

The airline’s Chairman Richard Goyder, who also received no pay from April to July, said management and the board had shown important leadership in taking the salary cuts.

“This is obviously not the same hardship as those stood down or facing redundancy, but it comes at a time when demands on management are greater than ever,” Goyder said.

Good news: Deaths due to HIV are way down