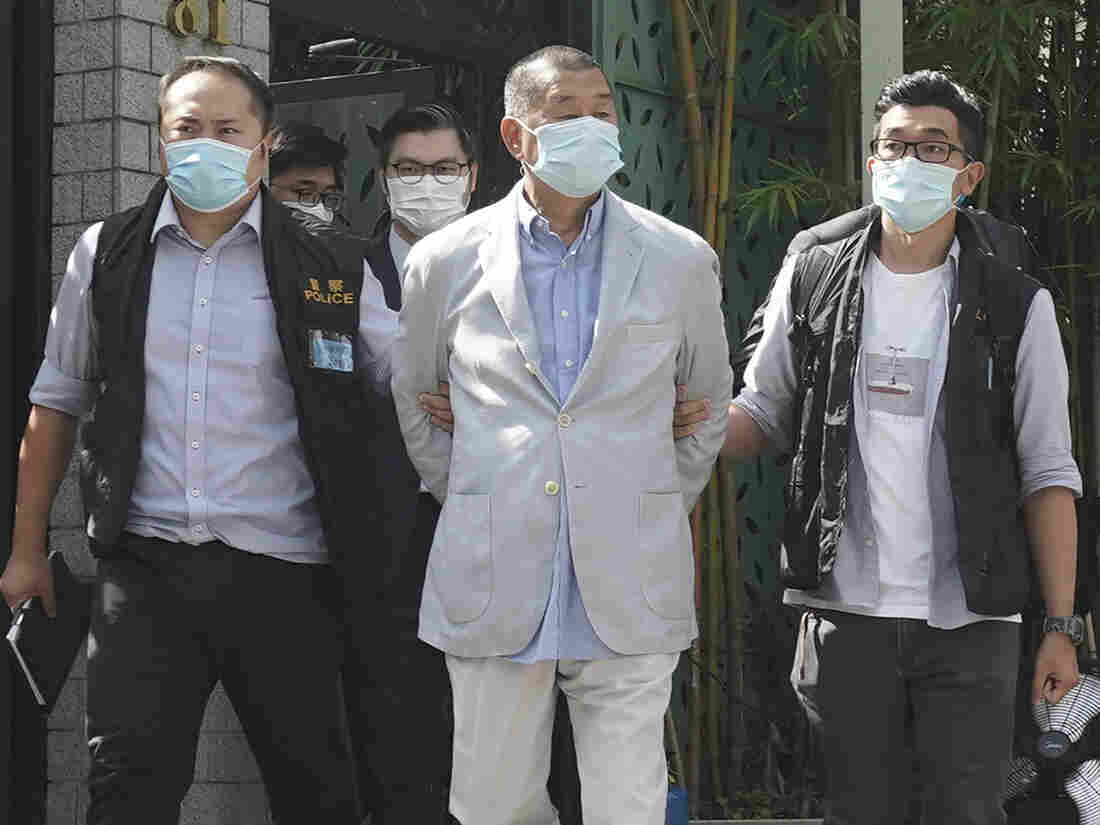 Hong Kong media tycoon Jimmy Lai, center, is arrested by police officers at his home in Hong Kong on Monday. Hong Kong police arrested Lai and raided the publisher’s headquarters in the highest-profile use yet of the new national security law Beijing imposed on the city after protests last year. 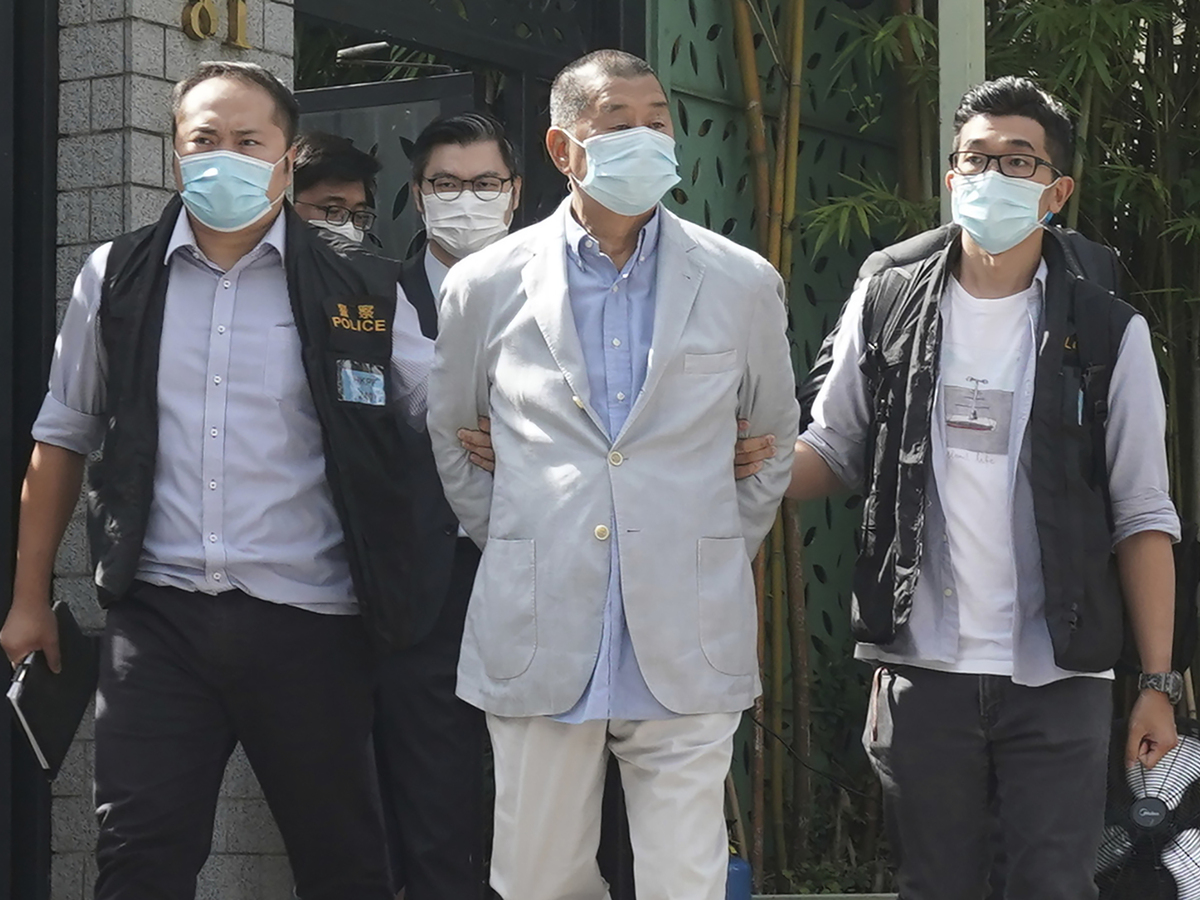 Hong Kong media tycoon Jimmy Lai, center, is arrested by police officers at his home in Hong Kong on Monday. Hong Kong police arrested Lai and raided the publisher’s headquarters in the highest-profile use yet of the new national security law Beijing imposed on the city after protests last year.

Hong Kong media tycoon Jimmy Lai and several executives at the media company he founded have been arrested for colluding with foreign forces, the highest profile arrests thus far under a sweeping national security law imposed by Beijing just over a month ago.

Lai, 71, is the chairman and majority owner of the staunchly pro-democratic newspaper Apple Daily and its publishing company, Next Digital. Share prices for Next Media surged 300 percent within hours of his arrest, as pro-democracy supporters urged each other online to support the company.

Lai’s two sons Timothy Lai and Ian Lai were also arrested Monday morning for, respectively, conspiracy to defraud and collusion with foreign forces. Hong Kong police said a total of seven individuals — among them Next Media executives — had been arrested on Monday under the national security law for colluding with foreign forces.

“It’s a combination of charges. Most are being arrested on some type of conspiracy to commit fraud charges…but really it’s just an effort to decapitate the management as they took out the top senior management with those charges,” Mark Simon, a senior executive at Next Digital, told NPR.

Livestreams of the ensuing police raid on Apple Daily’s newsroom showed about two hundred police entering the Next Digital building Monday morning. The police sealed off the newsroom and searched through documents on reporters’ desks while Lai, handcuffed, was led through the building. Police also raided a restaurant owned by Ian Lai.

The senior Lai first made his fortune in clothing and retail and soon parlayed his wealth into a media business, which he resolved would help uphold Hong Kong’s then-nascent but robust civil liberties. Hailing from an older generation of activists, Lai is both a political firebrand and unique figure who commands respect across the pro-democracy camp in Hong Kong.

That generation includes fellow pro-democracy advocates and veteran politicians Martin Lee and Margaret Ng, who were among 15 individuals, including Lai, arrested in April for “organizing and participating in unauthorized assemblies.”

Lai’s prominence in Hong Kong’s business community and his political activism made him an obvious target in Beijing’s ongoing efforts to tighten its control over the region. In May, Lai was singled out by the nationalistic Chinese state tabloid Global Times as potentially subject to criminal prosecution for subversion because of his Twitter account, which he largely devotes to upholding Hong Kong’s civil liberties.

“I have always thought I might one day be sent to jail for my publications or for my calls for democracy in Hong Kong,” Lai wrote soon afterwards in an op-ed published in The New York Times. “But for a few tweets, and because they are said to threaten the national security of mighty China? That’s a new one, even for me.”

Lai was also arrested in February for participating in an illegal assembly and faces additional charges of incitement for joining in this year’s annual June 4 vigil commemorating the victims of China’s Tiananmen Square Massacre in 1989.

But Lai faces much more serious penalties under the national security law, which Beijing implemented June 30. The law criminalizes what it calls collusion with foreign forces, subversion, secession and terrorism, with penalties of up to life in prison and potential extradition to mainland China in particularly “complex” cases.

In June, Hong Kong’s chief executive and a number of Beijing-backed officials defended the law, saying it would be applied to a very narrow group of individuals.

But Beijing’s national security law has had an enormous chilling effect on Hong Kong civil society, particularly in schools and universities as people self-censor out of fear of prosecution.

Police made their first wave of arrests under the law the day after its implementation, seizing protesters who attended a demonstration despite a police ban on doing so. In July, four people between the ages of 16 to 21 were arrested in a second wave after being accused of separatism due to their alleged links to a new pro-independence political party and statements posted on their social media pages.

How To Start a Debt-Free Business? | Case Study on Bada...