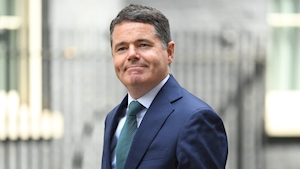 Finance Minister Paschal Donohoe has met with the heads of Ulster Bank today to discuss the ongoing review of its Irish operations.

Last month the bank’s owner NatWest confirmed that a “strategic review” was underway in the Republic, following reports that it is considering winding down operations.

Ulster Bank employs 3,000 people on the island of Ireland, with 2,400 of these in the Republic.

Following the meeting, a statement from the Department of Finance said Minister Donohoe had met virtually with the Chair of the Board of Ulster Bank, Ruairí O’ Flynn; the Bank’s CEO, Jane Howard; and its CFO, Paul Stanley.

“Minister Donohoe expressed concern about the ongoing speculation about the Bank’s future here in Ireland. He emphasised the importance of Ulster Bank to the Irish financial services market, to the wider economy and to the communities it serves. He pointed to Ulster Bank’s long history and important heritage here in Ireland,” the statement said.

“The Minister outlined that staff, customers and other stakeholders must be informed promptly about any decisions being made. In particular, he expects that staff representatives will be consulted and kept informed of developments.

“Ulster Bank confirmed that the strategic review is ongoing and assured the Minister that no decision has yet been taken,” the statement said.

“Ulster Bank also confirmed that there is no set timetable for this review and that it is fully aware of the strategically important role that Ulster Bank plays in the provision of financial services to the Irish market.”

The statement said that the Irish Government had “no formal role in the commercial decisions of Ulster Bank” and that Minister Donohoe was committed to further engagement with the bank as the review process continues.

Ahead of the meeting, general secretary with the Financial Services Union, John O’Connell, said the lack of clarity on the situation is concerning.

“We have been unable to get answers from either NatWest or Ulster Bank as to the future plans regarding Ulster Bank in the Republic of Ireland,” he said.

“We have a significant number of staff employed and a significant customer base that doesn’t know where it stands and we’re hoping that the Minister will challenge the bank to provide clear, unambiguous answers to staff and to customers.”