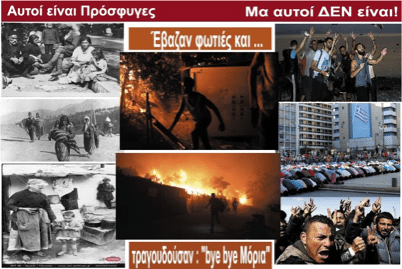 Moria hosts the largest migrant camp in the European Union. It is located near the bloc’s eastern border, on the Greek island of Lesbos, just a few kilometres from Turkey.

Lesvos is the most convenient place for Turkey to send large waves of miserable refugees from Syria to the EU every time it attempts to blackmail Brussels. As practically the Commission does not have the willpower to resolve this problem politically, and because the problem is political, it ignores Ankara’s pressures because it claims that “nobody can blackmail the Commission” or it. This adds to even more miserable souls on the periphery of the empire.

As for the conditions that these people who took an odyssey-like trip full of dangers to arrive to the “promised land of Europe”, but only to discover that the promised land is worse than the place they left, nobody cares in Brussels. This is an offense to the European civilization as it is reflected today by the Commission nomenklatura.

Moria is a facility run by the Commission, capable of hosting up to 3,100 people, but at the moment of the fire it had nearly 13,000. The Commission was in full knowledge of all such details and more, i.e. one shower facility without soap for every 500 people!

The way things developed in Moria was rather predictable. On September 2, the health authorities of Lesbos started random tests and identified 35 positive cases of the coronavirus in the Moria camp. They were immediately isolated within the facility, but the entire camp had to be quarantined. Under the circumstances, the hosts, all of a sudden, became inmates, though without any internal guards, within the facility. As was expected, with summer temperatures hitting 40 degrees Celsius, two fires exploded in the camp. One on the evening of the 8th/9th, as well as the next day. Videos uploaded to the net show that the fires were ignited by the inmates while they were chanting “Bye, bye Moria”.

The Greek authorities then evacuated the facility of 13,000 “inmates” onto the rest of the Lesbos, which is home to 86,400 islanders. The “inmates” then found themselves in search of food and a place to sleep. Of the 35 cases that had tested positive for the coronavirus, eight were located and isolated in a facility outside the burned remains of Moria, while the remaining 27 remain loose on the island.

The reaction of the European Commission was immediate as it sent to Moria Margaritis Schinas, the (Greek) Vice-President in charge of the European Way of Life (what for?)  . Certainly, Schinas was not sent there, instead of the Immigration Commissioner, Ilva Johansson, to secure the …European way of life for the islanders.

Why Ursula von der Leyen, and Johansson did not go to Moria personally, but instead sent a Greek Commissioner who is eying a top political position Greece, is an issue for another article in which I will tell you how Schinas became a vice-president of the Commission instead of former PM (EPP) Antonis Samaras.

For the time being, I will tell you that if the Moria case ends up being a fiasco (which is highly likely) the blame will go to Greek Prime Minister Kyriakos Mitsotakis. In the case of even a trace of success, von der Leyen’s image will magnify and will attribute all the glory to Schinas.

After this short introduction, to the point.

The Moria fire is not a Greek problem, it is a European and EU issue. Von der Leyen has the great opportunity in her presidency to do something, as so far, she has done very little.

The Greek government has no capacity, and it is not its business, to provide a solution to a pan-European problem. This is the Commission’s raison d’être.

Greece should make available to the EU an island that can temporarily host all illegal arriving refugees and immigrants to Greece. This would abolish all other refugee camps in the country.

For formality reasons, Greece must charge the EU a nominal fee per host, per day, (i.e. €10), and let the European Union run the business from the arrival of each host to the day that each case will be given a final solution; from European asylum with free travel to all other Member States, to relocation or deportation.

The bloc should provide for all the logistics on the human level, including food, housing, medical care, internal security, etc. Greece has several islands that could be offered for this operation, each of which are large enough and capable enough to host many, with some basic facilities, and without local population, and which fit the purpose of acting as a temporary place to house these people.

From thereon it will be easy for the bloc to rapidly build homes and some small light factories i.e. produce hand-made tourist souvenirs now supplied to Italy, Spain, Greece etc., from China and other handicrafts, to keep those willing to work busy and to make some money while they wait for their case to be examined.

Covid-19: Why is America’s death toll so high? | The Economist

How To Write a Business Plan To Start Your Own Business

The East Med continues to be in the limelight