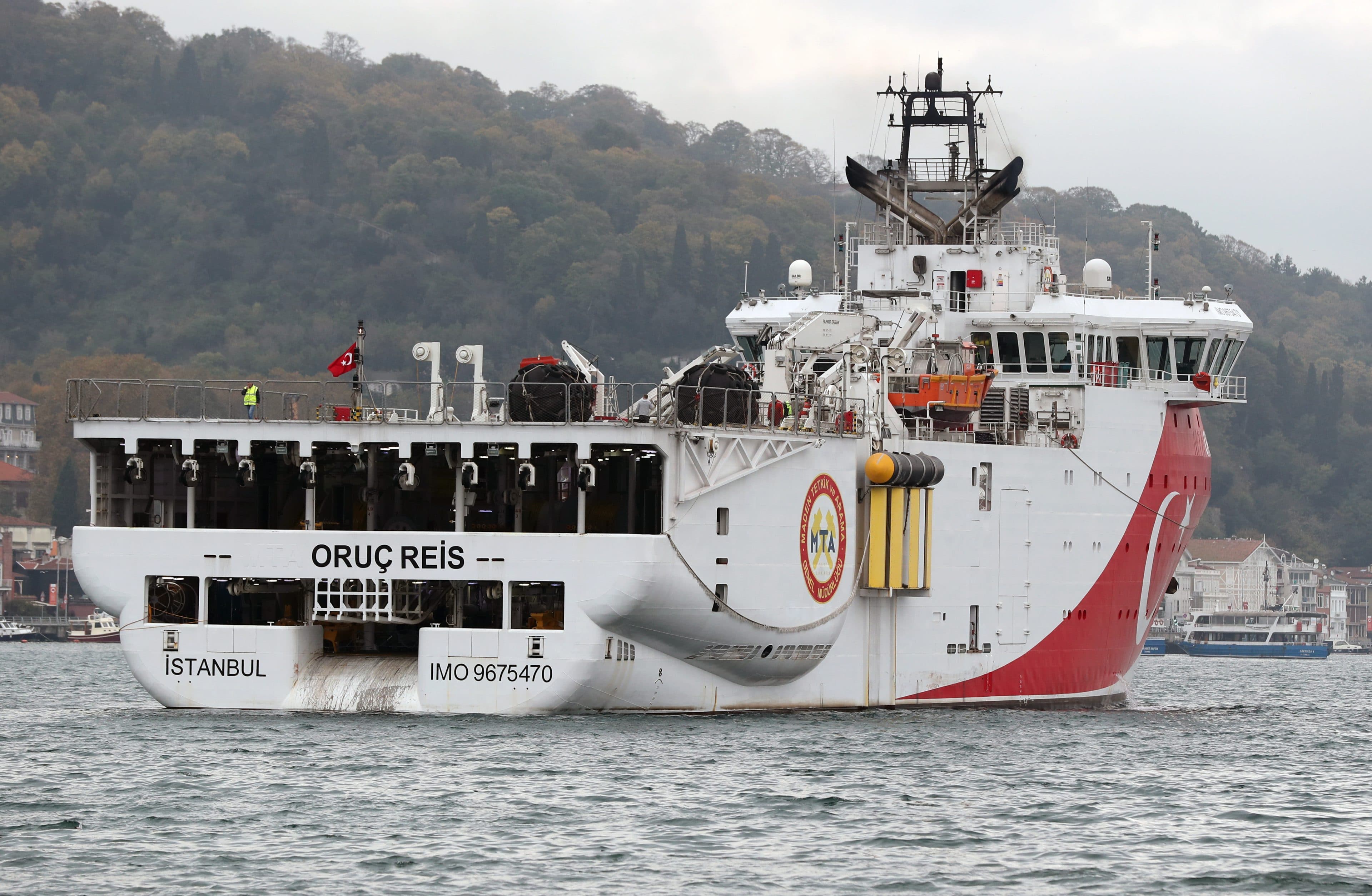 There were serious hopes that the Greece-Turkey maritime dispute was on the way to be defused. It looked as if concerted efforts by Germany to de-escalate confrontation and bring the two sides back to discussions were paying-off. Turkey pulled its seismic survey vessel Oruc Reis away from the disputed area on September 18 and a few days later its drilling-rig Yavuz left Cyprus’ EEZ.

Turkey even agreed to a NATO-brokered ‘military de-confliction mechanism’ with Greece, designed to reduce the risk of incidents and accidents in the East Med, but these hopes were short-lived. On October 12 Oruc Reis was back in the disputed area, supported by the Turkish Navy.

At a summit on October 16, the EU-27 said they “deplore renewed unilateral and provocative actions by Turkey in the Eastern Mediterranean, including recent exploratory activities.” They urged Turkey to reverse this and reiterated their “full solidarity” with Greece and Cyprus.

The restart of the surveys also embarrassed German Chancellor Angela Merkel, who earlier fended-off calls within the EU to sanction Turkey. Her spokesman said it “most certainly would be anything but conducive to the continued development of EU-Turkish relations.”

The US State Department said it “deplores” Turkey’s decision to restart surveys in the disputed region, and called on Turkey to “end this calculated provocation.”

But adding oil to the fire, the Turkish Energy Minister announced on October 20 that Oruc Reis will continue its current activities for another two months and possibly longer “depending on the results of the surveys.”

Greece is not being drawn into naval confrontation but said it will pursue all other avenues to resist Turkey’s actions. Its response so far is “We are not following Turkey in its game”.

In parallel with Turkey’s persistence to maintain tension with Greece, another seismic vessel, Barbaros, continues its activities in Cyprus’ blocks 6 and 7.

On the face of it, it appears that Turkish President Recep Tayyip Erdogan missed a good opportunity by sending Oruc Reis back, ostensibly for new surveys. But did he or was it deliberate? By doing so he snapped the EU and particularly Germany that put so much into bringing Greece and Turkey back from confrontation into discussions.

A valid question one is bound to ask now is: is Erdogan seriously interested in a negotiated solution, or is he determined to maintain confrontation for internal political reasons? Certainly, Turkey is at various states of confrontation with all its neighbours, at Erdogan’s choosing.

Especially as seismic surveys for hydrocarbons are nothing but an excuse. Not only these cannot take place effectively with so many warships around Oruc Reis, but the likelihood of finding hydrocarbons in this area is small. By perpetuating conflict, is it an attempt to deflect Turkish public opinion?

Given these recent actions, it seems that Erdogan prefers to maintain disputes as a distraction to divert internal opinion from his increasing problems with Turkey’s worsening economy and COVID-19. If this is the reason, then the risks for a hot incident could increase as the situation within Turkey deteriorates. So when Jens Stoltenberg, NATO General Secretary expressed concern this week about the increasing tension in the East Med, he may be well-justified.

Whatever it is, resumption of discussions is the only sensible way forward. Greece’s Prime Minister Kyriakos Mitsotakis can afford to shadow the Turkish Navy and wait. His standing within Greece is strong, as is support from the EU and the US, and with the funds, he is about to receive from EU’s Recovery Plan, Greece’s economy will be on the mend.

Apart from reacting strongly to these new provocations, the EU-27 will not go much further for now. They will still give Ankara time, until their summit in December, to return to the original plans and commence discussions with Greece. This is the preferred way forward by the EU, but if aggressive actions continue beyond that then it may be forced to act. But so far though the EU has been reluctant to take any serious action, despite Mr Erdogan’s taunts.

Whatever Ankara is aiming for, nothing can be achieved through its current actions. Only discussions and negotiations can lead to a resolution of these disputes. Let us hope that sense eventually prevails.

In the meanwhile on October 19 Turkey announced that it has discovered another 85bcm natural gas at the Sakarya gas-field in the Black Sea, taking the total confirmed reserves to 405bcm. It still plans to develop the field by 2023, but this is likely to prove quite a challenge. However, the fact that this is not altering Turkey’s aggressive posturing in the East Med is another confirmation that hydrocarbons have little to do with it.

In another development, on October 18 Turkish Cypriots elected a new leader, Ersin Tatar, following unprecedented, and open, support by Erdogan. Immediately after the election, in a telephone conversation, Erdogan and Tatar reopened their East Med hydrocarbons claims.

Completion of these elections restores conditions for renewed efforts to solve the Cyprus problem. The UN Secretary-General has confirmed he is ready to recommence his efforts for the resumption of negotiations. However, it remains to be seen whether the solution of the Cyprus problem is still a priority for Turkey.

With the crisis in the oil and gas sector continuing and massive cost-cutting, restructuring and reorganization of the international oil companies in progress, there is no sign of any plans to resume exploration in the East Med. On the contrary, the International Energy Agency warned in its recent World Energy Outlook that “higher cost development projects…look increasingly difficult to justify,” particularly in regions such as the East Med. One more reason why citing hydrocarbons as the root of East Med disputes is misleading.

Belarus at a crossroads | New Europe

How to give yourself — and others — a break

Second wave of pandemic may be underway in Europe warns Boris...