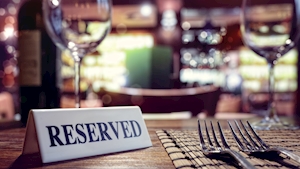 The Michelin star restaurant sector in Ireland runs the risk of contraction until its corporate and international clientele returns.

That is according to the chief executive of the Restaurants Association of Ireland (RAI), Adrian Cummins.

Last year, a record 21 restaurants on the island of Ireland secured or retained the prestigious Michelin status.

Mr Cummins stated that Ireland has been punching above its weight in terms of Michelin starred restaurants in recent years.

He added: “Michelin restaurants are at the top of their game but they are expensive to run due to the quality of their product.”

He stated that the sector was on course for a record year in 2020 before the Covid-19 impact, adding that a lot of Michelin restaurant operators are under extreme pressure due to the absence of the international and corporate clientele.

He stated: “I feel that until we have an international and corporate market, you will see contraction in the Michelin sector.”

Underlining the challenges faced by the entire industry, Mr Cummins stated that bookings were down 68 per cent for all restaurants in Dublin 2 in August year on year.

Mr Cummins stated that assistance from landlords is essential for Michelin restaurants to get through the impact of Covid-19.

Chapter One on Dublin’s Parnell Square is one of the country’s most celebrated Michelin star restaurants.

New accounts filed by the company behind the Ross Lewis owned restaurant underline the buoyant year enjoyed by the sector last year pre-Covid-19.

Accounts for Lindley Ltd show that the company had an accumulated loss of €69,724 at the end of February 2020.

The accounts were only recently returned in recent days to the Companies Office but were signed off by the directors on March 18th- just as the entire restaurant sector was about to shut down due to Covid-19.

Louis Walsh set for windfall after moving to wind up management...

Today's Chiropractic HealthNews For You – An Unknown Cure for Insomnia