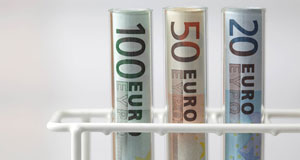 The Central Bank says a strong exports market will mean a fall in GDP of just 0.4 per cent, taking only a minimal hit as a result of the Covid-19 pandemic.

Exports in the pharmaceutical and computer services sectors helped to soften the blow of the pandemic.

The figure is in contrast with the nine percentage point drop predicted in its last quarterly bulletin in July.

The domestic economy is forecast to contract by roughly seven per cent this year.

Director of economics and statistics at the Central Bank, Mark Cassidy, says multinationals are having a big impact on the Irish economy.

Mr Cassidy said: “We’ve significantly revised our forecast for GDP. This reflects what we saw in the first half of the year, which was a very strong performance from pharmaceuticals and computer services sectors.”

The Central Bank also warned that a no-deal Brexit would lead to a two per cent drop in economic growth next year.

The Central Bank said: “In our latest forecasts it was considered prudent to make a change and assume that the EU and the UK move to trading on WTO terms from January 1st next.

“Such a development would have the effect of increasing costs, raising uncertainty and disrupting trade flows. While the impact would differ across sectors and regions, for the economy as a whole it would detract from the projected recovery, especially in 2021.”

“This has boosted export demand, to such an extent that we think GDP will only fall by 0.4 per cent, in contrast to domestic activity which we think will fall by about 7 per cent.”

Bulletin # 1 – Sibal hopes law education will be under...

Coronavirus: World must prepare for pandemic, says WHO – BBC News