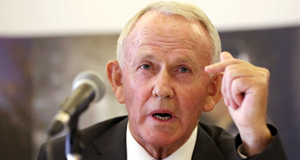 Former INM Chairman Leslie Buckley seems to be advancing a case that inspectors appointed to INM are unconsciously “rooting” in their investigation for a “whistleblower underdog”, former INM CEO Robert Pitt, the High Court has been told

Cian Ferriter SC, for the inspectors, said Mr Buckley’s bid to have them withdrawn is brought on an “entirely speculative” basis and there is nothing to support his claim of objective bias on the part of the inspectors in favour of Mr Pitt and against Mr Buckley.

Mr Buckley’s claims arise from the inspectors’ draft statement – presenting information and evidence gathered by them to date concerning five issues under investigation – in circumstances where the inspectors “have not made up their minds on anything”, counsel said.

All the inspectors were trying to do was to put out a working draft statement, on which they had expressly invited comment from Mr Buckley and others, but Mr Buckley was seeking, “Alice in Wonderland style”, to turn that on its head and attack the inspectors for objective bias.

Friday was the fourth day of the hearing before Mr Justice Garrett Simons of Mr Buckley’s application to have the inspectors withdrawn, or for a direction requiring them to recuse themselves, on grounds of alleged objective bias.

They were appointed by the High Court in September 2018 on the application of the Director of Corporate Enforcement following his office’s year long investigation into matters at INM arising from protected disclosures made in 2016 and 2017 by Mr Pitt and former INM Chief Financial Officer Ryan Preston.

Five issues being investigated include the alleged off-site interrogation in 2014 of the data of 19 individuals, including journalists, and Mr Buckley’s treatment of businessman Denis O’Brien as a major shareholder in INM.

The inspectors have circulated, to Mr Buckley and others, five draft statements concerning evidence and information gathered to date concerning the five issues, on which they have asked the parties to comment with a view to amendment and prior to a cross-examination process.

Mr Buckley’s complaints include how the inspectors have addressed, in their draft statement, evidence concerning an allegation by Mr Pitt that a ‘success’ fee was sought for Island Capital, a company of Mr O’Brien’s, arising from the sale of INM’s shareholding in APN News & Media when, Mr Pitt alleged, no such service was provided.

Mr Buckley has complained the inspectors now have “substantial” relevant evidence concerning that matter which was not included in their draft statement. He said there is now substantial evidence from the INM side, and the Island Capital side about the contribution of Island, including from Paul Connolly and Dermot Hayes, that they achieved a saving in relation to a discount negotiated on INM’s behalf which was worth more than €10 million to INM alone.

Mr Buckley said Mr Pitt’s allegation of raising concern at the time that no such services were provided by Island had been contradicted by former INM directors Jerome Kennedy and David Harrison but the inspectors had not set out these conflicts with Mr Pitt’s evidence.

The inspectors’ approach to a “dramatic change” between what Mr Pitt had told an independent review and the inspectors concerning this matter had the effect of keeping alive an allegation Mr Pitt is no longer making, Mr Buckley said.

In a replying affidavit rejecting the complaints, Mr Fleck said there are several references in the draft statement to evidence, including from Denis O’Brien and Mr Kennedy, as to the contributions made by Island Capital to the APN transaction.

In the context of Mr Buckley’s withdrawal application, the inspectors do not believe the evidence referred to by Mr Buckley objectively supports the proposition of a “dramatic change” in Mr Pitt’s account as Mr Buckley asserted, Mr Fleck said.

The draft statement presented the state of the evidence as gathered to date and the inspectors have not begun, to date, to determine what was actually said by the parties, he said. The inspectors will explore the matter in further evidence and Mr Buckley will also have the opportunity to cross-examine Mr Pitt about this, he added.

The hearing resumes on Tuesday.