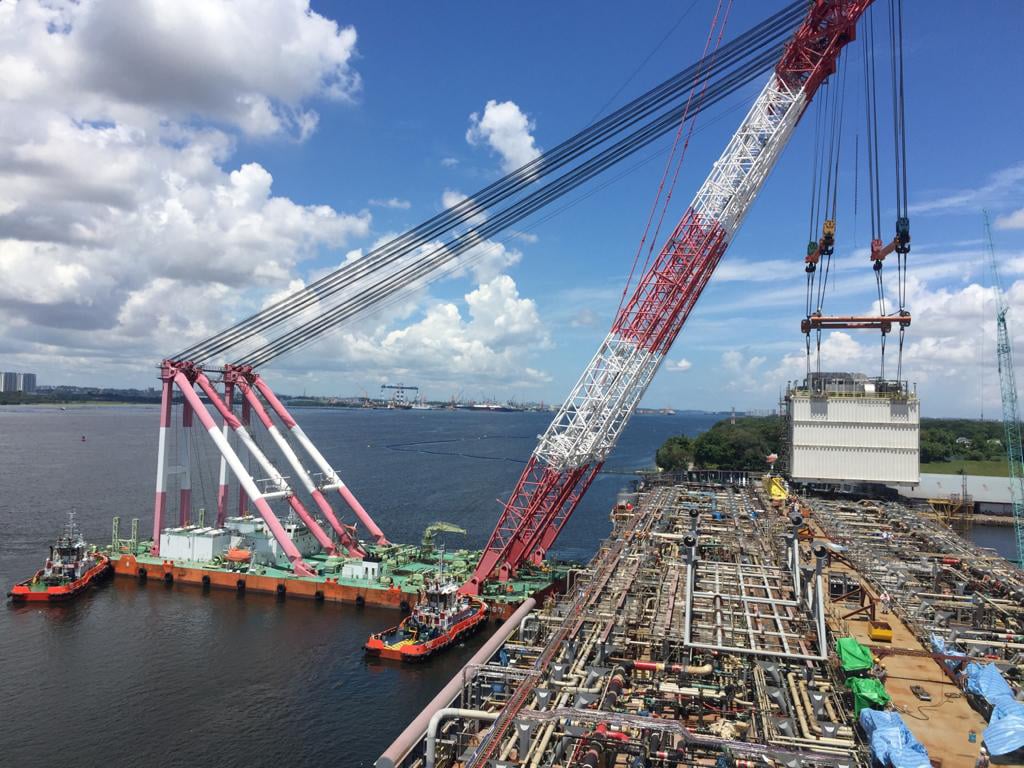 Greece’s Energean, the gas producer focused on the Mediterranean, announced on August 26 two important developments in the Karish Development Project.

In Singapore, the first topsides module lift on to the Energean Power floating production storage and offloading (FPSO) hull has been safely and successfully completed at Sembcorp Marine’s Admiralty Yard, Singapore, Energean said in a press release.

According to Energean, the electrical house (E-house), which contains all the FPSO control equipment and electrical switchgear, was lifted onto the Energean Power hull on the 24th August. The E-house, weighing in at 850 tonnes, was lifted using the L-801 Barge pontoon crane, with lift preparation commencing early morning and successful touchdown on the hull in the early afternoon.

Sembcorp Marine has been subcontracted by EPC contractor TechnipFMC, while lifting operation has been executed by Jurong Marine Services PTE.

The piles were transported and installed by the heavy lift construction vessel “Fairprayer”, owned by Jumbo Offshore and subcontracted by the Karish EPC contractor, TechnipFMC.

The operations were performed under Covid-19 social distancing conditions and without any LTIFR incidents, Energean said.

The Energean Power FPSO will be used to develop all of the Energean’s Israeli fields. It will be installed 90 kilometres offshore and be the first FPSO ever to operate in the Eastern Mediterranean. The FPSO will have a gas treatment capacity of 800 MMscf/day and liquids storage capacity of 800,000 oil barrels.

Installation of the Energean Power FPSO mooring lines is now in progress and the project remains on track to deliver first gas in the second half of 2021.

Scary Owl Nightmare | THE BOSS BABY: BACK IN BUSINESS |...