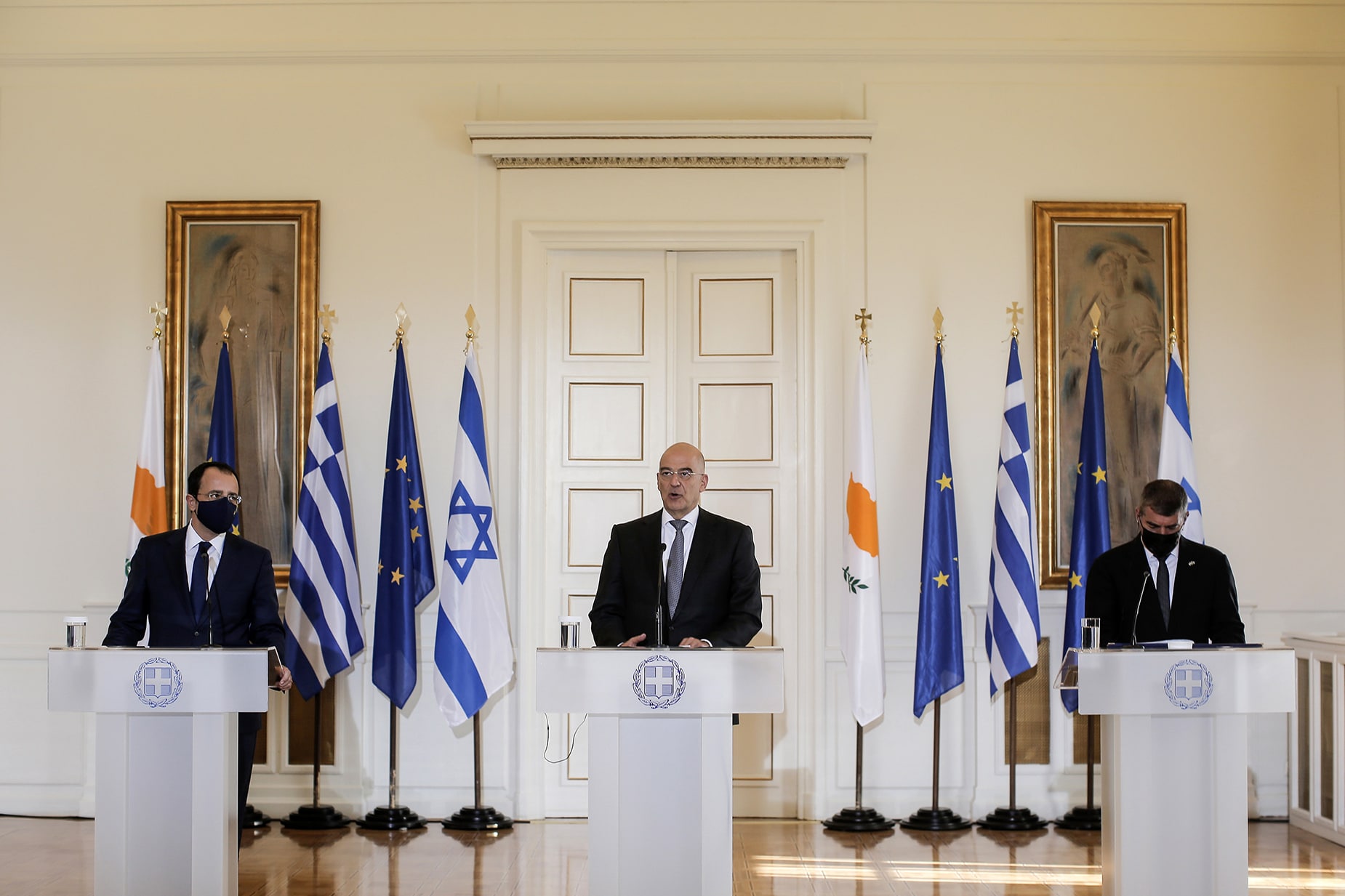 Greece, Israel and Cyprus, which are facing similar challenges in the Mediterranean region, pledged on October 27 to increase cooperation.

During a trilateral meeting with Israel’s Foreign Minister Gabi Ashkenazi and Cyprus’ Foreign Minister Nikos Christodoulides, their Greek counterpart, Nikos Dendias, said in Athens the three countries enjoy close ties of friendship and share common values. “We also face common challenges. We are three modern democracies with an exceptionally long history. While we are geographically located in a turbulent region, prospects of cooperation in many sectors are unfolding,” Dendias said. “Our guiding principle is respect for international law and the promotion of good neighbourly relations. In this framework, I welcome the normalisation of relations between Israel and the United Arab Emirates, Bahrain and, most recently, Sudan. Greece, in turn, with the support of all Greeks, has contributed towards ensuring stability in the region: through agreements concluded with Italy and Egypt, and through our agreement with Albania to refer our differences regarding the delimitation of maritime zones to The Hague,” the Greek Foreign Minister said.

Dendias hailed the statements by Russian Foreign Minister Sergei Lavrov, who stressed a day earlier that Greece has every right to extend its territorial waters to 12 nautical miles, on the basis of International Law. “He thus resoundingly shattered a long-standing myth; that is, that Russia supposedly opposes our country’s inalienable right to extend its territorial waters both in the Aegean Sea and in the Eastern Mediterranean,” Dendias said.

He said the trilateral partnership of Greece, Cyprus and Israel reaches far beyond the narrow limits of a purely energy-oriented programme. “Our focus on energy is certainly a priority, but we aim at further improving both our economic and our wider political relations. Today, Gabi, Nikos and I picked up the thread again, exchanging views on how to deepen and expand this beneficial relationship that, in the words of Nikos, the most experienced among us, is taking place here in Athens today for the first time at the ministerial level,” the Greek Foreign Minister said.

“From Defence and Security to Technology, Research, Water Resources Management, Desalination, Renewable Energy Sources, Environmental Protection and Health — particularly during these difficult times of the COVID pandemic — Education and the management of our common Cultural Heritage. And, of course, cooperation among our communities abroad,” he said.

Dendias reiterated that the strategic relationship between Greece, Cyprus and Israel is not directed against anyone. “On the contrary, it is an open invitation to all, bar no one. However, there is one fundamental condition. This condition is, of course, what is common sense, what is self-evident: respect for international law, respect for good neighbourly relations. This is a condition founded on international legality. That is why it is firmly supported both by the European Union and by the United States of America. Greece, Cyprus and Israel are working methodically with the United States to promote security and prosperity in our region in the context of the 3+1 mechanism — and we are certainly open to the prospect of enlarging the mechanism to include other countries in the region. We are thus charting a new geography of understanding that transcends the old stereotypes, that reshapes the map of our region,” he said.

The Greek Foreign Minister slammed new illegal actions by Turkey. “Within a few short days, Turkey is once again taking actions aimed at undermining any prospect of constructive dialogue, unlawfully reserving areas within the Greek continental shelf for illegal seismic surveys, or other provocative actions, such as the Turkish Vice-President’s illegal visit to occupied Varosha, a flagrant breach of the relevant Resolutions of the UN Security Council,” he said.

“We have unequivocally condemned these actions. These developments were certainly discussed during my talks with my counterparts yesterday and today. The common denominator of these talks was that ways to halt the aggressiveness and destabilising role played by Turkey must be found — but always within the framework of international legality,” Dendias said.

“At the same time, we jointly stressed that the antidote to Turkey’s revisionist aspirations and to its efforts to impose its positions through force is the cultivation of multilateral cooperation for the benefit of all the countries and peoples of the region. At this point, I would once again like to make myself perfectly clear. Our region will not be returning to the 19th century. We will not let that come to pass. Our region will move forward in the 21st century on the basis of the common understandings we have continuously and consistently achieved,” he said.

For his part, Ashkenazi said in Athens that regional cooperation between Israel, Greece and Cyprus will bring economic growth and security for the three countries, along with greater regional stability.

Tripartite diplomacy will “promote regional security and the national resilience of every one of our countries,” Jerusalem Post quoted Ashkenazi as saying. “I plan to personally act to promote economic cooperation between the countries to connect strategic infrastructure, like the electric grid…and the EastMed initiative,” he said, referring to plans to build an EastMed pipeline from Israeli waters to the European mainland via Cyprus and Crete.

Ashkenazi also hailed the Eastern Mediterranean Gas Forum (EMGF), established by Israel and Egypt, of which Greece and Cyprus are also members.

The Foreign Minister expressed hope that Israel, Greece and Cyprus will continue their joint meetings.

In addition, Ashkenazi referred to the recent peace and normalisation deals between Israel and the United Arab Emirates, Bahrain and Sudan. “The Middle East is undergoing a positive upheaval in recent months,” he said. “After many years of ties that were mostly kept secret from the public, we are witnessing the opening of a window of opportunity for peace between friends, countries and cultures.”

WTO members greenlight EU sanctions against US over Boeing aid

BBVA: Your Bank For Small Business (:15)