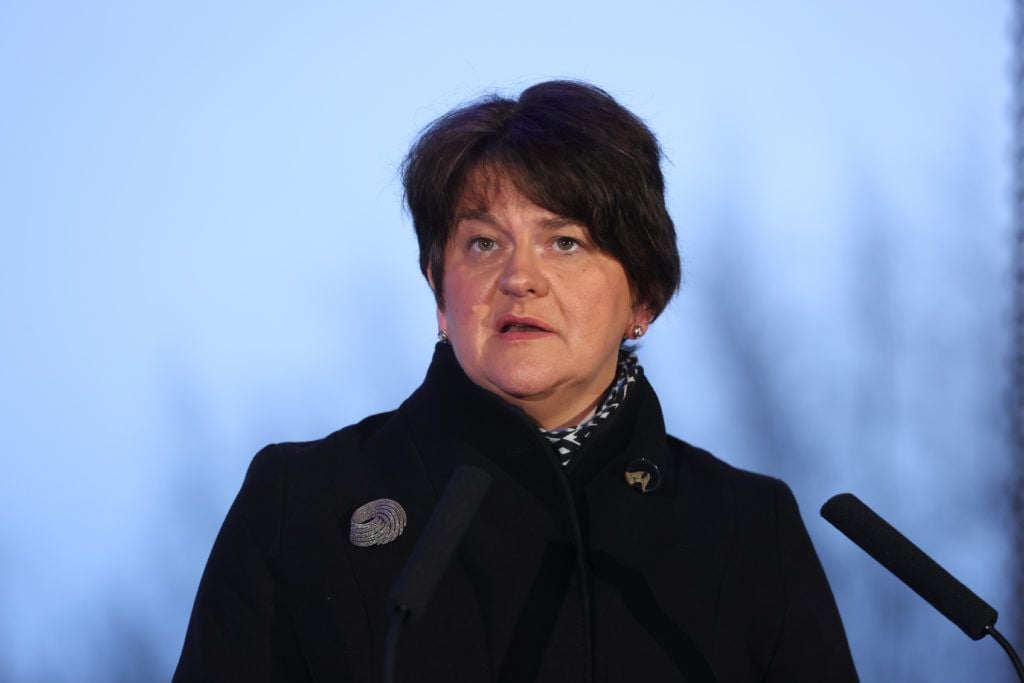 Supermarkets using more Northern Ireland products is one positive to emerge from the disruption to post-Brexit Irish Sea trade, Arlene Foster has said.

The First Minister again called on the UK government to resolve issues that have hindered the flow of food products from Great Britain to Northern Ireland since the end of the transition period.

However, the DUP leader said it would be a positive development if one consequence of the new arrangements was more locally sourced produce on the shelves.

Mrs Foster referred to Sainsbury’s responding to the shortage of some GB supplies by selling NI-sourced Spar products instead.

New requirements on traders to comply with EU single market rules on food safety checks and certifications has led to disruption in the movement of animal-based food products from GB to NI.

This has led to depleted shelves in many stores across Northern Ireland.

Giving evidence to her Assembly scrutiny committee, Mrs Foster said: “I did notice that Sainsbury’s had taken some of the Spar products into their shops in Northern Ireland, I don’t see that as a negative.

“Sainsbury’s only get I think, the Daera (Department of Agriculture, Environment and Rural Affairs) minister (Edwin Poots) was telling me, a very limited number of produce is from Northern Ireland that goes into the supermarkets in Northern Ireland.

“And therefore if they’re increasing the number of products from Northern Ireland in their supermarkets in Northern Ireland, I think that’s a really good thing actually because it shows that our produce is being able to take advantage of that.

“What I wouldn’t like to see is that consumers have a reduction in the number of ranges that they’re able to access and I think we’ve seen a little of that happening, and it’s something that we’ll be engaging with the supermarkets on.”

The First Minister also referred to the prospect of the UK government invoking the Article 16 mechanism within the Northern Ireland Protocol, which governs the new arrangements, to halt their operation of new trading if they are causing economic harm.

“It’s for the UK government to decide if they invoke Article 16 and I thought it was interesting today to hear the prime minister say that he would not hesitate to implement Article 16 if it was necessary,” said Mrs Foster.

“I think the way in which the protocol has rolled out has shown that there is a necessity to looking at all of this again.”

She said Stormont ministers continued to seek solutions to the problems and were involved in daily meetings with the UK government on the issue.

“But if Article 16 has to be invoked it’s a matter for the UK government,” she said.

Mrs Foster added: “I think there definitely needs to be action taken by our own government in relation to this protocol which is causing damage to the people of Northern Ireland.”

Deputy First Minister Michelle O’Neill said the issues were the result of a trading adjustment shock and said many GB companies had not prepared properly for the new arrangements.

“I think that the adjustment that businesses are having to make in the here and now is what’s causing a huge number of these difficulties,” she said.

The deputy First Minister said they are trying to get a resolution “that helps minimise the disruption for businesses”.

“As I have always said in terms of Brexit, the best you could do is mitigate the damage and that’s what we’re trying to do right now,” the Sinn Féin vice president added.

“This is why we’ve all said that Brexit was bad and there was always going to be problems that come with it.”