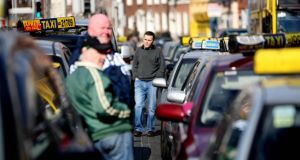 There have been calls for State investigation after taxi app Free Now missed its fourth driver payment deadline in two weeks, leaving up to 14,000 drivers unpaid for fares.

The cash owed to some full-time drivers is estimated at up to €1,000 each for work completed earlier in the month.

Fianna Fáil TD Cormac Devlin wrote to Minister for Transport Eamon Ryan on Monday, asking him to direct industry regulator the National Transport Authority to become involved, according to the Irish Times.

“The company has missed several deadlines leaving thousands of taxi drivers uncertain about when they will be paid,” Mr Devlin wrote.

“Ultimately new legislation may be required to ensure companies with the market share of Free Now have adequate liquidity and are properly bonded to ensure drivers’ funds are secure.”

Free Now, previously known as MyTaxi and prior to that as Hailo, is owned by German car brands Daimler and BMW.

Customers can use the Free Now app to order a taxi and pay through credit or debit card, with the money then forwarded on to drivers each week in one payment with Free Now taking a commission of about 15 per cent.

The Irish arm of the company paid taxi drivers two days late the week before last when it missed its first Wednesday payment deadline.

A deadline was also missed last week, with payment then failing to be issued two days later as promised. With taxi drivers expressing concern publicly, Free Now said payment would be made over the weekend, which did not happen.

Free Now has said the problem is due to delays at its payments processor, Germany-headquartered Wirecard Bank.

Wirecard Bank is part of the Wirecard group which entered insolvency with a €1.9 billion hole in its accounts this summer.

Free Now said it was working to resolve the issue and drivers would be paid “as soon as possible”.

It said it is switching to another payments processor, believed to be Commerzbank, in an attempt to avoid further delays.

Kazakhstan extends foreigner permits until November 1 due to COVID-19

? DW News Live: Breaking news and in-depth analysis from around...