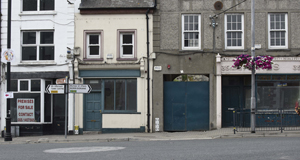 Researchers say there has been a noticeable increase in the number of vacant shops and businesses in nearly every part of the country.

The research, carried out by mapping firm GeoDirectory, found that the average vacancy rate now stands at 13.5 per cent.

Despite the number of shop spaces already vacant, GeoDirectory says it could be years before we see the full impact of the pandemic on businesses.

Chief executive, Darragh Keogh believes the collapse of international tourism means there is probably worse to come in some areas.

“There are some counties that are much more exposed to a change in tourism. In Kerry, 24 per cent of their commercial stock includes hotels, restaurants and bars.

“Really an east-west divide is what we are seeing. Connacht is carrying the highest levels of vacancies, with 19 per cent in Sligo.

“Leitrim is 17 per cent, and Mayo and Roscommon are nearly 16.5 per cent. They are very high levels of vacancy and it’s all clustered in one province.”

The Most Romatic Moments In Sex Education

The Cutting Edge 3: Chasing the Dream