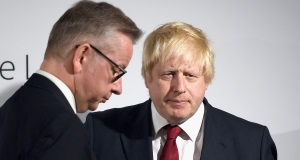 Up to £355 million (€393 million) will be used to help businesses in Northern Ireland cope with additional administrative proceedures caused by Brexit.

The funding, announced by Chancellor of the Duchy of Lancaster Michael Gove, will help firms deal with the paperwork associated with bringing goods in from the UK and the rest of the world.

The new Trader Support Service is aimed at addressing concerns from Northern Ireland businesses that ‘red tape’ could disrupt the flow of goods from the UK.

It will provide end-to-end support to deal with import, safety and security declarations on behalf of traders.

Businesses in Northern Ireland can sign up for further information about the scheme from August 7th, before it becomes operational in September.

A £155 million (€171 million) investment will fund the development of new technology to ensure the process can be fully digital and streamlined.

The measures were deemed necessary as the Northern Ireland protocol requires it to remain in alignment with EU rules on goods, effectively creating a regulatory border in the Irish Sea from January 1st after the transition period ends.

Subsequently, digital import and safety and security declarations will be needed to avoid tariffs on trade within the UK and that goods destined for the Republic of Ireland or the EU pay tariffs when they should.

Officials have pointed out that the support should be seen as an enduring commitment rather than a short-term fix.

The new service is outlined as part of the publication of new guidance on the protocol for businesses moving goods into and from Northern Ireland.

Further support could be provided to cover health certification requirements for agrifoods.

“Today’s investment underlines our absolute commitment to the people and businesses of Northern Ireland as we move towards the end of the transition period,” Mr Gove said.

“As part of our ongoing engagement with Northern Ireland businesses and the executive, we are also publishing further guidance for businesses on the operation of the protocol.

“As we continue to engage with businesses and our discussions with the EU proceed, we will update these resources to ensure that traders are ready for the end of the transition period.”

FBD employee says assurances given to publican that Covid-19 was covered...

Can gout be prevented?