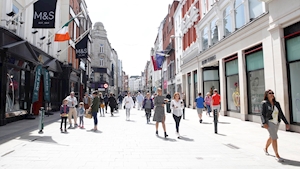 A continual drop in public footfall into the south of Dublin city is leading a group of retailers to pay for their customers’ parking in order to entice trade.

The Dublin Can Be Heaven group incorporates businesses in the Grafton Street area and is starting the scheme this week.

Group spokesperson Kim Condon, who runs Lafford Jewellers, said they will be giving customers vouchers for an hour of free parking.

The move follows negotiations with multi-storey car parks in the city centre and the ongoing downward spiral in footfall numbers since the Covid-19 crisis took hold in March.

Compared to this time last year, trade has tumbled downwards by 60 per cent in some areas due to international tourists staying away and office workers being based at home.

The numbers vary across the city, with parts of the north Dublin back to normal while Baggot Street in the south city is at just 20 per cent of where trade should be.

The Council has also trialled the pedestrianisation of a number of streets in the Grafton Street area over four weekends, with an online survey carried out by the council finding that over 90 per cent of 1,456 respondents felt this significantly improved their experience of the streets.

However, retailers in the Dublin Can Be Heaven group said many of their members found that shoppers with cars avoided the city during this time.

Mary Whelan, who runs Eirlooms in the south of the city, said: “The problem is that people are being told not to use public transport and people are still nervous about coming into the city.

“So we figure that if they feel safe enough to drive then the next biggest problem is the cost of parking. So we are tackling that with this campaign.”

According to a survey which 45 retailers responded to, eight thought pedestrianisation improved their takings while 13 said it lessened their takings and 26 said it made no difference.

Graeme McQueen, Dublin Chamber spokesman, said that businesses need all the help they can get.

“Businesses in the city centre really need the help. Numbers are still down on where they would have been pre-Covid.

“The big challenge is particularly through the week. Mid-week is really, really quiet between Monday and Thursday. This allows people to have the confidence to go back into the city centre. Get families back in, get people back in shopping – that’s going to help the businesses, that’s going to save jobs and livelihoods.”

Budget will be about getting pandemic balance right, Donohue says