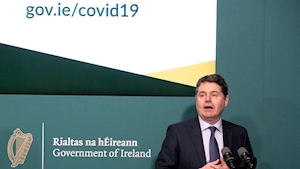 Minister for Finance Paschal Donohoe has said that any tax liability from the Wage Subsidy Scheme can be paid over the coming years.

Mr Donohoe confirmed that if any tax liability does arise on account of the Scheme, the Revenue Commissioners will allow it to be paid back over four years, he told Newstalk’s Pat Kenny show.

Mr Donohoe said that he anticipated that any such tax liability would be small, and given that this had been a very difficult year for many, he hoped that allowing the time frame to repay tax would be fair for all.

Interest will not be charged and there will also be the option to pay the tax up front and in one single payment.

The Minister said that 81 per cent of employers who were on the previous scheme were now on the new scheme, an indication that the scheme was going to play a really important role in keeping people at work.

Mr Donohoe rejected the suggestion that the scheme might be used by employers to purchase new machinery. He said the scheme was set up to protect jobs and incomes and what was important was that it was open to companies to use funding to hire new staff.

However, if purchasing new equipment was going to make a company viable and continue employing people, then, in theory, that option was open to them, he said.

In a statement for the Department of Finance, the Minister confirmed that 36,746 employers have now registered for the Scheme, adding that the scheme remains open for applications.

Talking to your doctor about an abusive relationship – Harvard Health...