It was a unique experience, Ancient Olympia completely deserted. I visited the birthplace of the Olympic Games on Saturday, November 28, a few weeks after all of Greece’s archeological sites had closed down due to a country-wide lockdown to stave off the coronavirus pandemic.

A female guard opened the gate after previous arrangements and I was able to spend a few hours visiting this majestic place, including the Temple of Zeus dedicated to the god of the sky and ruler of all gods. The temple, built in the second quarter of the fifth century BC, was the very model of the fully developed classical Greek temple of the Doric order.

I visited Ancient Olympia as a child in the 1970s and 1980s and several times since then as my fathers’ house is nearby, but have never seen it like that before. It was a beautiful, sunny November day, completely silent except the wind rustling the leaves; birds were singing and a dog barking occasionally in the distance. It is a divine landscape, calm and serene; exuding beauty and strength. There is positive energy and you can feel the vibes of a place that was vibrant 2,500 years ago.

I headed to the center where the Temple of Olympian Zeus dominates. I phone a retired renewed architect and friend in Athens, Iakovos Rigos, who specializes in restoring archeological sites and he guided me through the temple.

A few years ago, he visited Ancient Olympia on the occasion of an intervention study in one of the monuments of the area and had also been back there this October.

“In the middle of the 5th century BC, Libon the Elean built the largest temple of the Peloponnese, a model of Doric style, on a raised – by three metres – terrace (built base). They dedicated it to the leader of the Gods, Zeus, whose huge statue inside the sanctuary of the Temple reached 12 metres,” Rigos said. The statue was one of the seven wonders of the ancient world fashioned by the renewed sculptor Pheidias. 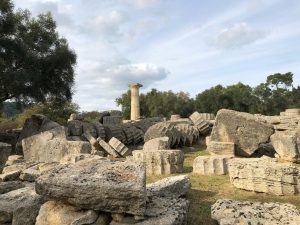 The temple lays spread on the ground, only a layer of stone rises above the ancient floor, one and a half to two metres. The columns, like huge vertebrae, spread to the right and left after centuries of earthquakes and people burning, neglecting, vandalizing the temple, he explains. The massive columns spread on the ground, more than two metres in diameter give a sense of scale of the temple’s massive size in ancient times.

A single column, a product of a recent restoration by the German Archeological Institute, gives an idea of ​​the scale with a view of the third dimension of the site after the column was replaced back to its original position in 2004. By the end of November 2012, the second stage of the reconstruction was finished aiming at presenting the western opisthodomos to the visitors in a greater way.

“The columns were over ten metres high, the Temple reached a total of twenty, its length about sixty-five metres. The Temple of Zeus was built ten years earlier than the Parthenon of Pericles and about the same size. Consider that it is twice the Temple of Hephaestus (the so-called Thissio) in the ancient market of Athens, as well as the Temple of Poseidon in Sounio,” Rigos told New Europe. “I was impressed by the visit to the great Temple of the great God…. Or the direct contact with the monuments and the study of the ancient History, art, philosophy, church building, opens a small window in the ‘communication’ with the great legacies of all times,” Rigos added.

After I climb down from the Temple of Zeus, I walk nearby to the Temple of Hera or Heraion that was dedicated to the queen of the Greek Gods. It was the oldest temple at Olympia and one of the most venerable in all Greece. It was originally a joint temple of Hera and Zeus, chief of the gods, until a separate temple was built for him. 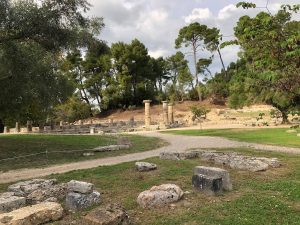 New car sales up 6% in October despite Covid challenges

CDC predicts more than 180,000 US coronavirus deaths by August 22

China to restore power line between Uzbekistan and Tajikistan for $25...