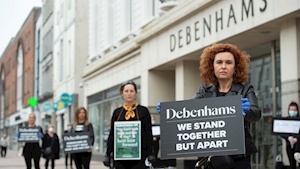 Debenhams workers are holding a series of nationwide protests today as they prepare to mark their 150th night on the picket lines in their campaign for better redundancy terms.

The laid-off workers have described a new one million euro deal proposed yesterday by liquidator KPMG and their trade union Mandate as a “slap in the face”.

The workers say at least €10 million needs to be made available, and that there is €25 million worth of stock in the shops they are blockading.

Debenhams protesters out in force today, fair play to them, I hope their perseverance pays off #Debenhams pic.twitter.com/ND5bpoyJii

Valerie Conlon, the shop steward for the former Debenhams department store on Patrick Street in Cork, said the deal is insulting: “It’s an insult, it’s a slap in the face to staff, especially those that have been out there nearly 150 days now, that’s what they thought would be an okay offer.

“The point of this afternoon is different now compared to what it was because before we were planning this we had no offer, but today now people will be telling Mandate and KPMG that we will not be accepting what they are trying to force upon us.”

Thank you to the former Debenhams workers for inviting me to join their event today marking 150 days on the picket line (tomorrow is the 150th day). I hope they get what they are entitled to – and it’s just wrong that they have to do this to get it #workersrights #Debenhams pic.twitter.com/XGp3KWSsCi

Marie Murphy, a Debenhams worker at a rally on Henry Street in Dublin, said the workers are determined to reject the offer: “We want them all to stand together and know that they’re worth a lot more than that, and that we can get more.

“Because we know that Debenhams have millions in the bank, so to vote no and not accept that the union, our union, is even putting that out to us.”

The workers say they’ve been fighting for justice for 150 days@VirginMediaNews pic.twitter.com/lQJLqef5Cg