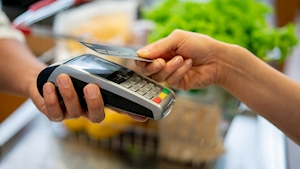 The amount of money people are spending monthly on contactless payments is getting close to €1 billion euro.

Consumers have increased their use of contactless payments due to the ongoing pandemic.

“People have really embraced contactless payment and we know that half of all payments in August were made in contactless form.

“It is really becoming more popular and people are embracing it, we are seeing that move away from cash to digital. This looks like a trend that we are going to see continue on into the future.”

The average number of contactless payments made per day rose to two million valued at almost €32 million, more than double the value of payments in April, according to the BPFI.

Outlining the key trends from today’s figures, Brian Hayes, BPFI chief executive said: “Consumers have undoubtedly increased their use of contactless payments and reduced their dependence on cash in recent months.

“Today’s figures show a record breaking high in terms of monthly contactless spending with contactless payments accounting for half of all card payments in August 2020.

“Some of this can certainly be attributed to the increase in the contactless limit to €50 in response to the COVID-19 crisis.”

He said the shift from cash to digital payments is further highlighted when you compare it to recent Central Bank of Ireland figures which show that the value of ATM withdrawals was 33 per cent lower in August 2020 than a year earlier.

MY DAILY ROUTINE IN THE USA!!!