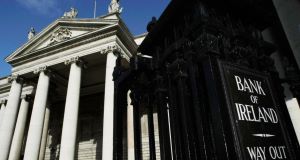 The Central Bank made contact with Bank of Ireland over payments to customers defrauded by scammers.

Bank of Ireland has done a u-turn by saying it will now reimburse customers impacted by the recently exposed ‘smishing’ scam, which has targeted customers of all banks in recent months, but seemingly mostly Bank of Ireland.

Only last week, Bank of Ireland suggested affected customers were liable for their own losses, having voluntarily given their account details.

The scam has been targeting consumers via text messages passed off as official bank communications and aims to trick customers into parting with account details.

In Bank of Ireland’s case, the fraudulent text was embedded within genuine communications from the bank. The scam tries to lure customers to a fake Bank of Ireland website to order a new bank card and asks for various personal account details.

It is understood that the amount of Bank of Ireland customers affected by the smishing attack tallies in the low hundreds. It is not known how much Bank of Ireland will be paying out in compensation.

“Smishing has been around for a long time, but there has been a spike in attacks since Covid-19, with fraudsters clearly recognising an opportunity to target consumers as we spent more time using phones and computers,” said Bank of Ireland’s head of retail banking Gavin Kelly.

“Bank of Ireland has been working closely with customers for many years on this type of fraud so we understand the distress caused to customers, especially where it hasn’t been possible to trace the money, which thankfully is the minority of cases.

“We have carried out a review into a recent smishing attack which has managed to defraud a number of customers…We also acknowledge that fraudsters have been particularly active during this period and as consumers, we have had many other pressing concerns to deal with through Covid-19. Therefore, we will be reimbursing the customers for these losses and the bank will absorb the financial impact,” Mr Kelly said.

A spokesperson for the Central Bank said: “Consistent with our approach to supervisory engagement, we intervene, within the scope of our regulatory mandate, to ensure the interests of consumers are protected by focusing on the issues which pose the greatest potential or actual risk of consumer harm.”

AIB and Permanent TSB have also been impacted by smishing attacks and both said they would be reimbursing customers affected by fraud.

“This is an industry wide issue and while Permanent TSB is only dealing with a small handful of cases, we take the matter extremely seriously and are managing the situation tightly,” a PTSB spokesman said.

“We are continuing to communicate with our customers so that they are aware to be vigilant of such fraud threats. We expect to refund any losses suffered by genuine victims of frauds such as this,” he said.

An AIB spokesperson said: “Where customers have been scammed through no fault of their own, we will deal sympathetically with them on a case-by-case basis.”

Nearly 20,000 US Amazon workers have tested positive for coronavirus