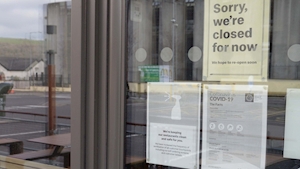 Politicians have called for emergency Government aid to support businesses in Kildare, Laois and Offaly as a lockdown is imposed in the area for the next two weeks to curb the spread of Covid-19.

The politicians say local businesses have barely survived months of the Republic’s country-wide lockdown, and are now faced with a second enforced closure.

Businesses that were forced to shut their doors from midnight last night in the area include cafés, restaurants and pubs serving food, cinemas, theatres, museums, leisure centres and gyms.

Fine Gael TD Charlie Flanagan described the Laois partial lockdown as “draconian” and said that state aid needs to follow, according to the Laois Nationalist.

“Business in the area has been struggling to recover in recent weeks and has now been set back considerably. Families with children, who opted to holiday at home this year, were preparing for holidays at the seaside and are in shock,” he said.

“We now have a localised lockdown which is going to be impossible to implement and has caused widespread dissatisfaction throughout the midlands, an area already reeling from the economic shock waves of Bord na Móna. State aid needs to follow any restrictions.”

Sinn Féin TD Brian Stanley said the lockdown would be “devastating” for the hotel and hospitality sector and there was a case for relief or emergency funding as the new restrictions will cause “a deep economic shock” to the area.

Kildare South-based Labour Senator Mark Wall called for the creation of a lockdown fund in the form of grants to support businesses and those who had booked staycations.

He said a targeted fund “could be the difference between a firm surviving and not” and that locals “want to follow public health advice and directions but they need additional supports to get them through the uncertainty of the next few weeks.”

“The Government needs to step in and compensate people who have been forced to cancel their holidays due to no fault of their own. These include people within the counties that have booked holidays and those who had booked to come to the three counties.”

How to tell 'real news' from 'fake news' | USA TODAY