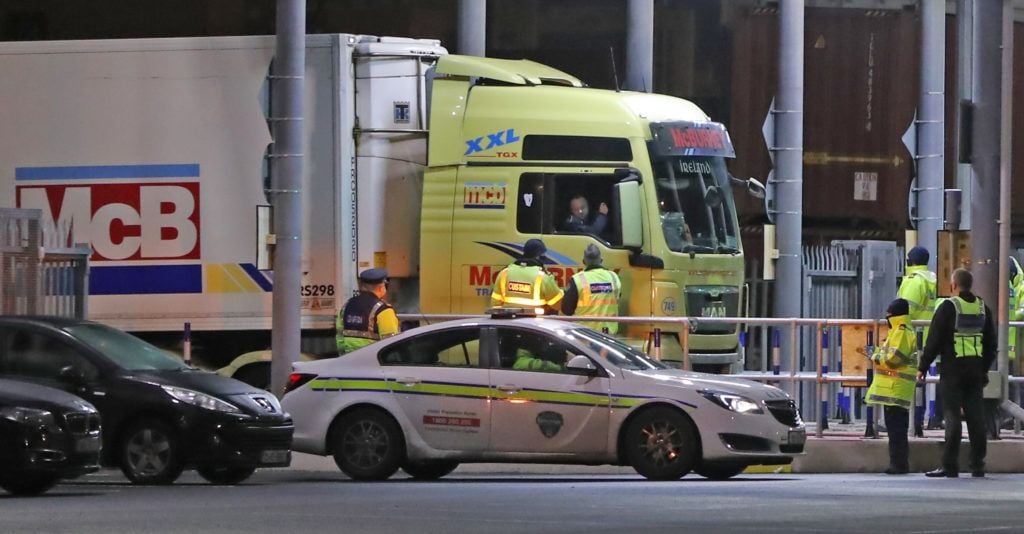 Businesses that fail to adhere to new post-Brexit customs rules will be penalised by Revenue, it has been warned.

Friday saw the first ferries arrive in Ireland from Britain under new trade rules following the end of the Brexit transition period.

But despite pleas from hauliers, there will be no light-touch implementation of the new regulations.

Tom Talbot, head of customs operations in Dublin Port, said Revenue will sanction those who flout the rules.

Speaking on Friday, he said: “Do not be tempted to skip the customs facilities and go through the port.

“Revenue are there, we will know who has left the port without calling to customs as required. We will follow it up. Where necessary, in due course, it will be followed up with sanctions. Please heed that message.”

He added: “Although we don’t propose to apply those sanctions on day one, we prefer to work with businesses and traders and where there is genuine error, we will follow that up.

“Where there is non-compliance, those penalties, those prosecutions, the legislation is in place and, where we need to, Revenue will not be found wanting to apply those sanctions.

“Each offence will carry a different fine and sentence, and they are in line with current customs penalties.”

On Friday, several lorries were turned away because they did not have the correct paperwork filled out.

Mr Talbot said he was pleased to see the rules being firmly implemented at this early stage.

He said: “I’m aware that one of the ferry companies have turned back a number of trucks and we very much welcome that.

“We have made it very, very clear that where trucks arrive at the port, whether that’s Holyhead or Dublin, if the correct paperwork has not been done in advance, those trucks will be turned back.”

Mr Talbot said that there could be no loosening of the rules, even for a short grace period, because of Ireland’s responsibilities as an EU member state.

“The reality is Ireland is a member of the EU, and we have requirements based on that membership,” he said.

There were few delays at Dublin port on Friday morning despite the new regulations, because business is typically slow on New Year’s Day.

Mr Talbot said: “The first trucks from Britain post-Brexit arrived in Rosslare Europort and Dublin Port this morning. As we expected, the freight was very low given the time of year and given where we are.

“When we look at the ferries coming in through the rest of the day, we expect similar low volumes of traffic.

“It probably won’t be until next week before we see an increase in volume of trucks coming into the various ports.”

In Dublin, Irish Ferries’ ship Ulysses docked at 5.55am with about a dozen trucks on board, having travelled from Holyhead in Wales.

There were no delays as the freight trailers cleared customs checks for the first time under the new rules.

In Rosslare, Irish Ferries’ ship Isle of Inishmore arrived from Pembroke in Wales. A truck transporting bananas was the first to pass the new customs checkpoint.

After 47 years as an EU member state, the UK left the bloc at 11pm on New Year’s Eve, becoming a third country for trade purposes and customs declarations.

New documentation and red tape is now required between EU member states and Britain which is anticipated to cause massive delays at ports in the coming weeks.

A small number of ships arrived after 11pm on Thursday night but they were covered by the previous arrangements.

The Stena Line ferry group said while it had been quiet in Holyhead early on New Year’s Day, the port authority had indicated that six freight loads bound for Ireland had been turned away due to not having the correct references.

While it has been quiet in Holyhead so far today, the port authority indicate that six freight loads bound for Ireland have had to be turned away due to not have the correct references. Hauliers please ensure you have your PBNs ready for check-in. @WGEconTransport @TrafficWalesN https://t.co/ae7KmPwPxb

The company appealed for hauliers to have their pre-boarding notifications (PBNs) ready for check-in.

The Minister for Foreign Affairs said the dramatic disruption of a no-deal Brexit had been avoided but that did not mean that things are not changing fundamentally for businesses trading with Britain.

Simon Coveney told RTÉ’s Morning Ireland: “Make no mistake. From today on, any company doing business with, to or through the UK is going to face a very new reality: customs checks, sanitary and phytosanitary checks if there are food products involved, export declarations, health certs, regulatory checks and all of the paperwork and delays and costs that go with that.

“We have avoided the kind of dramatic disruption of a no trade deal Brexit, but that doesn’t mean that things aren’t changing very fundamentally, because they are.”

Speaking on BBC’s Radio 4’s Today, Mr Coveney said the change in trading arrangements with the UK would inevitably cause disruption.

“We’re now going to see the €80 billion worth of trade across the Irish Sea between Britain and Ireland disrupted by an awful lot more checks and declarations, and bureaucracy and paperwork, and cost and delay,” he said.

UK virus cases jump to highest since May