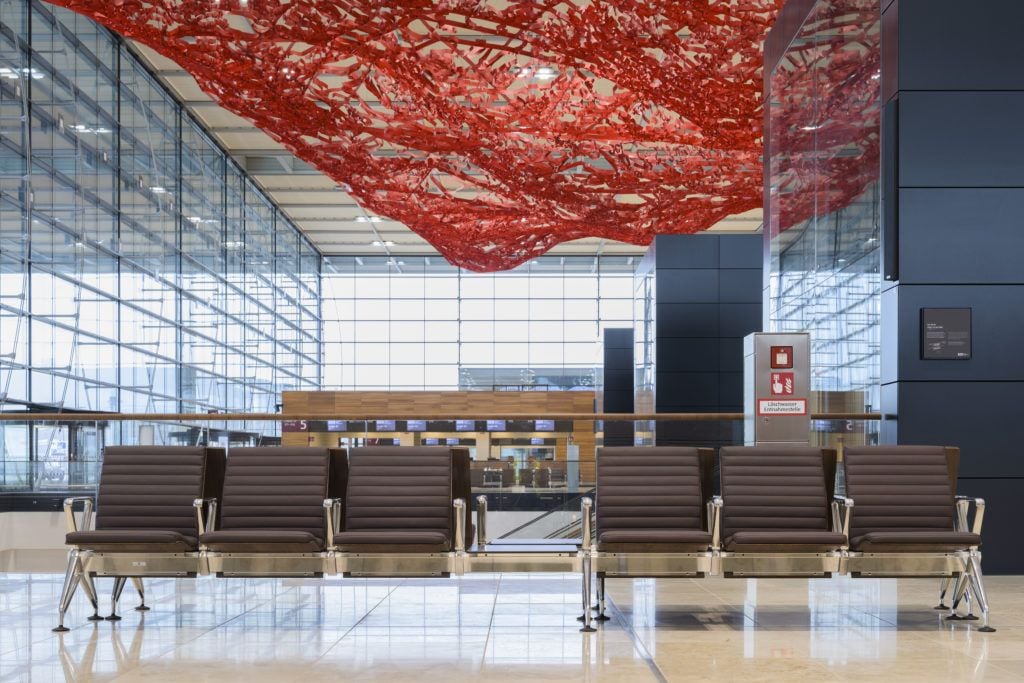 Berlin Brandenburg Willy Brandt Airport (BER), which was initially planned to open in 2011.

to mark the ocassion an Easyjet Airbus A320neo was due to land simultaneously with a flight operated by German flag carrier Lufthansa, but poor visibility resulted in the planes landing separately.

Construction and technical problems plagued the development of BER.

Costs increased from an initial budget of €2.7 billion to €5.9 billion.

EasyJet will operate BER’s first commercial departure with a flight to Gatwick on Sunday morning.

More than 12 million passengers travelled on the carrier’s Berlin flights in 2019, but demand for air travel has collapsed due to the pandemic.

EasyJet boss Johan Lundgren said it will base 18 aircraft at BER, making it “one of the most important and largest bases that we have”.

Asked if the repeated delays in opening the airport were frustrating, he replied: “I’m focused on the enjoyment that we’re going to have over this weekend to finally get there.

“That’s behind us now. We want to focus on making sure that we give our customers a great experience and become much more efficient for ourselves.”

He said BER will streamline the airline’s Berlin operations as it replaces the city’s two Cold War-era airports, Schonefeld and Tegel.

The former will be used as a terminal for the adjacent new airport, while the latter closes next week.

EasyJet’s flight to open BER departed from Tegel as part of the airline’s repositioning of its aircraft.

A group of activists dressed as penguins gathered at the airport in a bid to disrupt its opening due to the environmental impact of aviation.

Lena Tucana, spokeswoman of the Stay Grounded campaign, said it was a “real scandal” that the airport has opened “despite the climate crisis”.

She added: “We will block this madness with civil disobedience.

“Penguins don’t fly and are the coolest birds that stay on the ground.”

importance of law education in usa