There has been a dramatic erosion of public trust in Belarus as a result of the massive election fraud that took place in Alexander Lukashenko’s self-proclaimed victory during the country’s August 9 presidential elections – an event in which government authorities claimed that Lukashenko received slightly more than 80% of the votes that were cast.

Belarus’ civic initiatives have presented conclusive proof of vote-rigging thanks to the use of modern IT technologies and statistical analysis. Despite strong pressure from state authorities, independent observers and ordinary citizens gathered as many protocols presented by the election commissions as possible (1,130 out of 5,767) and processed them. At those polling stations where election commissions demonstrated protocols to the public, Lukashenko’s challenger, Svetlana Tikhanovskaya, got on average 13 times more votes than at polling stations with more secretive commissions.

Scant sociological data and many indirect indicators pointed at a dramatic erosion of trust in the state bodies and Lukashenko, himself, over the last years and months. A representative poll of Minsk residents conducted by the Institute of Sociology of the Belarusian Academy of Sciences throughout March and early April 2020 showed that Lukashenko’s trust rating amounted to 24%, while the Central Election Commission enjoyed an even lower rating of 11%.

The coronavirus epidemic as an important factor

Lukashenko’s rating has likely fallen since April due to his irresponsible handling of the coronavirus epidemic. It began spreading in Belarus in early March, exactly when the more active stage of Lukashenko’s election campaign started unfolding. Instead of introducing quick adjustments to the election campaign, the Belarusian ruler repeatedly criticized excessive public attention to the coronavirus problem, downplayed the risks posed by the epidemic, and made a number of controversial statements that provoked the public’s anger.

By June, Belarus was among the 15 most-affected countries with the highest number of identified coronavirus cases per capita. At the same time, officially, Belarus maintained one of the lowest infection and fatality rates in the world. A number of observations (e.g., a very high share of coronavirus-related deaths among medical workers) suggest that the actual death toll could be underestimated by 10 times or more.

While the share of Lukashenko’s supporters among the rural population (22% of Belarus’ residents) and elderly people is undoubtedly higher, his low level of support among the urban population is irrefutable. Furthermore, currently, the people’s trust in government and Lukashenko in regional cities and smaller towns is unlikely to differ greatly from the capital region. The scale of protests in the last two weeks and particularly on August 16 has proven that fact. 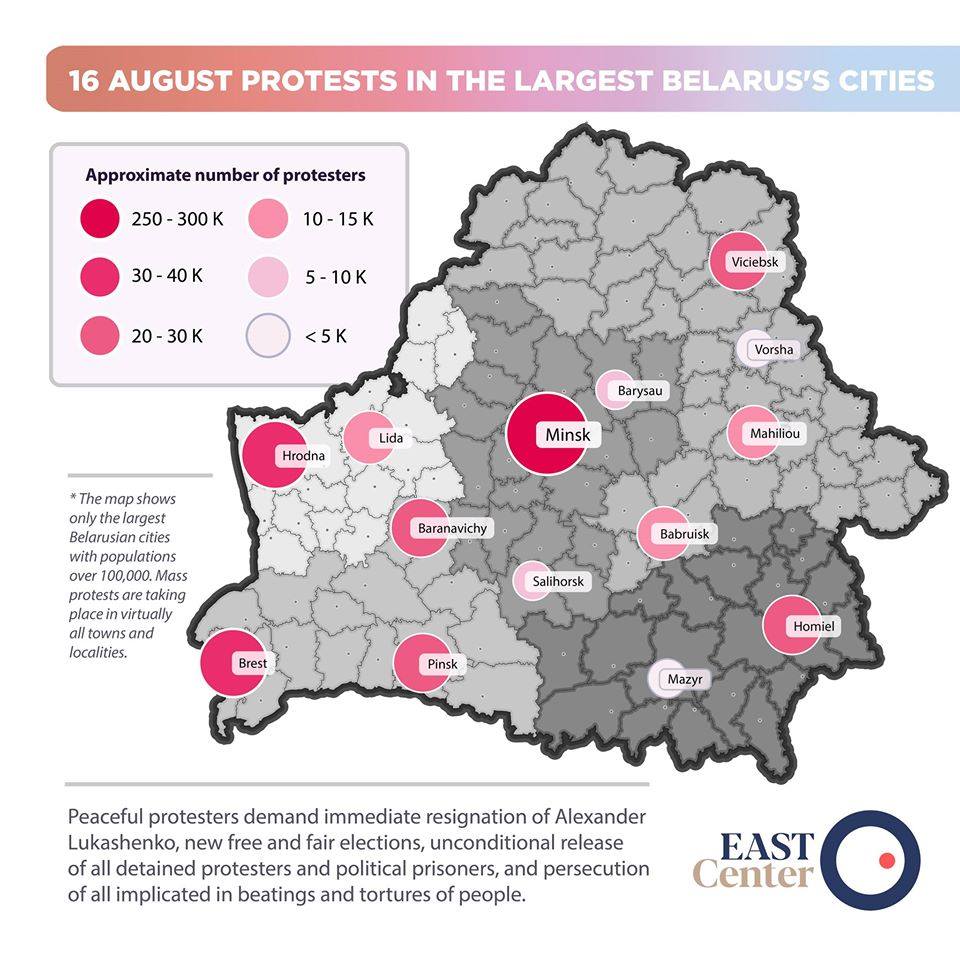 Based on available electoral and sociological data, it is fair to suppose Lukashenko got around 25-35% of the votes cast over the whole country. In some areas, Lukashenko received a truly insignificant percentage despite widespread propaganda and censorship in state media. 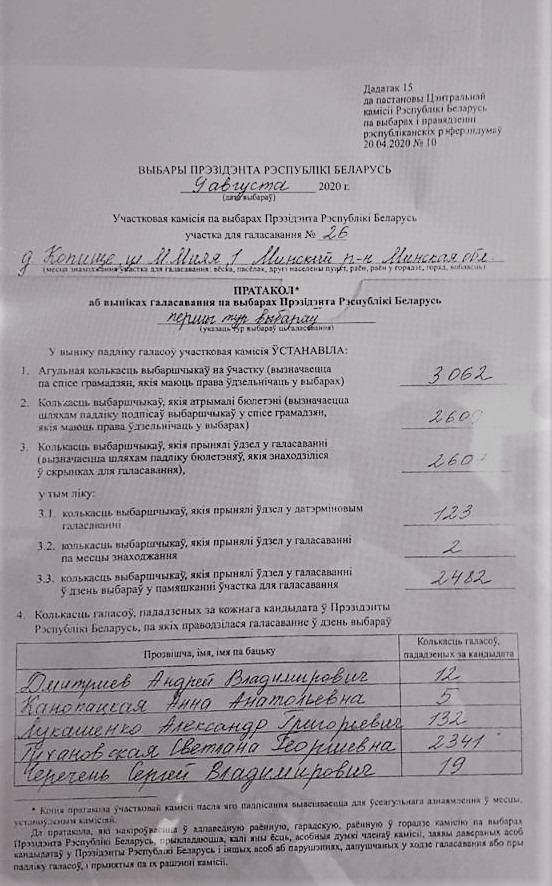 The results for one of the polling stations in the Novaya Baravaya district in the Minsk suburbs. Lukashenko got 132 votes (5%), Tikhanovskaya received 2,341 votes (90%) out of 2,607 voters

Election fraud was characteristic of many past Belarusian elections. My recent research, based on an analysis of Belarus’ presidential elections results in 2006, 2010 and 2015 and approved by the Central Election Commission, demonstrate that they contradict mathematics and cannot exist as a matter of principle. For instance, according to official results of 2006 presidential elections in some cities and many districts of the Mogilev (Mahiliou) and Gomel (Homiel) regions, the numbers of votes against all candidates were either null or negative.

It is fair to suggest that Tikhanovskaya at least made it into the second round if she did not win an outright electoral majority in the first. For millions of Belarusians, the answer to this question lost all significance in the wake of the unprecedented violence by Lukashenko’s security apparatus against peaceful protesters on election day and the days following.

Belarus’ factual (not official) election results are a notable case in modern history as a long-time ruler failed to secure a victory over an opponent with no experience in civic or political activities. Tikhanovskaya was largely an accidental candidate who had to campaign amid repressions against her husband, members of the election headquarters, and civil society as a whole. She became a symbol for millions of Belarusians who crave change and the restoration of lawfulness in the country.

Tikhanovskaya’s perfect score is particularly painful for Lukashenko given his views that the people of Belarus cannot vote for a woman to lead the country.

Parallels with Ukraine’s EuroMaidan are wrong

The large-scale protests in Belarus have no geopolitical agenda, which is in stark contrast to Ukraine’ EuroMaidan Revolution of 2013-14. This is a movement that demands the resignation of Lukashenko, free and fair elections, and the release of political prisoners. Pro-Kremlin and Belarusian state propaganda, however, do their best to deceive the audience and make wrong comparisons.

Belarus’ state-owned TV channels say the protests are just like what was seen in Kyiv during the Maidan and attempt to scare their viewers with images of violence and destruction. Russian federal TV channels’ hosts, and carefully selected guests, call the peaceful protesters ‘militants’ and allege that Ukraine and the West are actively interfering in Belarus.

Belarus’ protesters are being opposed by a massive security apparatus and a centralized power vertical. A ‘civilian’ component in Lukashenko’s ruling coalition has never been as sidelined from the decision-making processes as it is now. Since last year, Belarus’ political regime has been evolving into a personalist military rule.

If, despite the efforts of the repressive apparatus, the opposition’s mobilization capacity remains high and massive acts of civil disobedience continue, the people of Belarus will confront – and are already confronting – another big challenge manifested in the Kremlin’s actions.

The coercion of the Belarusian population to the deeper integration with Russia, either under the rule of the unpopular Lukashenko or as a nominally parliamentary republic in case of his eventual resignation, remains a probable scenario.

*For a more detailed pre-election report, you can find the author’s work: https://east-center.org/wp-content/uploads/2020/07/Belarus-at-a-Crossroads-Political-Regime-Transformation-and-Future-Scenarios.pdf?fbclid=IwAR30e3HnHP7HuBOk3Zx39pcEGuxZUHletcMaTi0f-lZBIym58M4GcQYUfrw

Blippi Visits a Firetruck Station! | Learn about Vehicles for Kids...

Not all of Europe’s consumers are equal: The issue of dual...