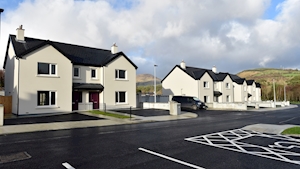 Up to 47,000 homes will need to be built each year to address the housing crisis according to a new report, while the latest CSO figures revealed that the housing completion rate in the last quarter fell by 32 per cent due to the Covid-19 pandemic.

The building figures in the report are almost twice the 25,000 target outlined in the Project Ireland 2040 plan, which is the Government’s long-term strategy on infrastructure.

According to the report, the four main sources of housing demand are natural increase in population, net migration, household size and household obsolescence. The level of owner-occupied housing is largely in balance but the private rental sector and social housing lag behind making up the 25,000 unit shortfall, the report by property economist Ronan Lyons and Irish Institutional Property (IIP) found.

Ronan Lyons of Identify Consulting and author of the study said: “The mix of new housing supply in recent years in this country has been inadequate. New homes are increasingly out of sync with Ireland’s household structure. Ireland’s housing is out of line not only with its own demographics, but also compared to all other European countries, where typically 50 per cent of dwellings are apartments.”

The report has three recommendations for improving the housing output in Ireland to deal with the housing crisis.

Cost-rental schemes see costs shared with the taxpayer for low income households. Given high costs, the report states that controls on rent levels for newly built homes will significantly exacerbate the shortage of non-owner-occupier housing.

Shared equity loans would allow thousands of aspiring homeowners, who are currently priced out of the housing market, to get on the property ladder according to the report.

Shared ownership housing is another recommendation in the report. It states that this would allow the purchaser to buy a share of their home, at least 25 per cent, and pay rent to a housing association. A ‘staircasing’ option would allow people to increase their share in a property over time.

Over half of home buyers saving more since start of pandemic

The future of HSBC in China

Bachelor of Arts in Business Communication